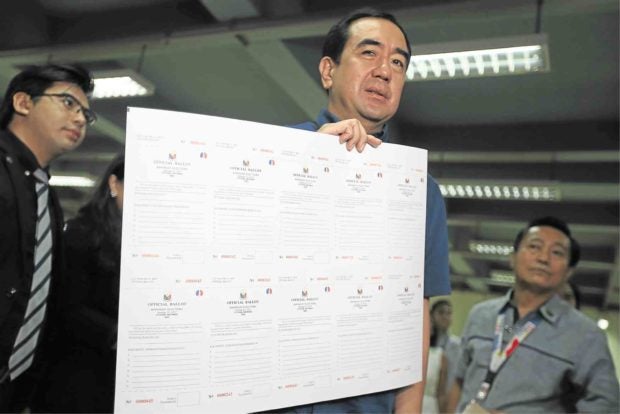 ALL IN A DAY’S WORK While hounded by his wife’s allegations that he had unexplained wealth, Commission on Elections Chair Andres Bautista turns up at the National Printing Office for the kickoff of the printing of ballots for the barangay and Sangguniang Kabataan elections set for Oct. 23. —EDWIN BACASMAS

Grave coercion, qualified theft and robbery, and extortion were among the charges filed by Commission on Elections (Comelec) Chair Andres Bautista on Tuesday against his estranged wife in the Taguig City Prosecutor’s Office.

“We already filed a case,” Bautista said on Wednesday in an interview on ANC’s “Headstart.”

“[B]ut it was Bautista who may have committed greater crimes. The harassment suits against Mrs. Bautista is part of their strategy to silence her from speaking the truth. We know we have the truth on our side,” Loon said.

Patricia has accused her husband of having P1 billion in unexplained wealth, including a total balance of P329 million in accounts in Luzon Development Bank.

An  assistant prosecutor of Taguig confirmed that Bautista  filed a complaint against his wife on Tuesday. She, however, declined to tell reporters the nature of the case.

“There are cases filed against each other but with respect to the nature of the case we cannot disclose it yet because we need to conduct a preliminary investigation,” Senior Assistant City Prosecutor Laarni Fabella told reporters on Wednesday.

The Comelec chief claimed that a “demolition job” was behind Patricia’s allegations.

“To me really, there is an orchestrated campaign against me, perhaps against Comelec, maybe against the elections,” Bautista said.

He challenged his wife to file a case against him instead of presenting to the media documents she claimed were her evidence against him. “All of these would be explained in due time, where these moneys are coming from. But why in the media? Why are they doing this as a media play?”

He said the documents in Patricia’s possession, including passbooks and financial records, were stolen from their home in November last year, when his wife locked him out of their condominium unit.

The documents were not his alone but also included those of his parents and siblings, he said.

Bautista said his family would hold a press conference in due time to answer Patricia’s allegations.

Asked if he believed his wife was unwittingly being used for another agenda against him, Bautista said: “I  don’t know [her] anymore. I used to know her. But as you know, she thinks differently … She supposedly has a third eye. Again, I’m not saying that’s right or wrong.”

Throughout the interview, Bautista was in tears and his voice cracked whenever he mentioned his four sons (aged 8, 13, 14 and 16) and how they were affected by the marital row.

“I told her (Patricia), so what will happen to the kids if these things will be made public? She said, ‘No, no, the universe will take care of them.’ One of my kids has stopped attending school. Is the universe taking care of them right now?” he said in the television interview.

He said the controversy was one of the most painful chapters in his life.

Bautista said he had been estranged from his wife since rumors of her alleged infidelity surfaced sometime in 2012 or 2013.

“She has described this person as her soulmate. Now tell me, if you are with somebody, and yet you are told, that your spouse has already found another soulmate, how will you feel?” he said.

He recalled that on his 50th birthday, Patricia attended the party, but “she was silent the whole time.” He said he and the alleged lover shared the same birthday.

“She didn’t sleep in our house that night. For the past two to three years, she has not been sleeping in our house three to four times a week. Basically, we are estranged,” the Comelec chair said.

Told that Patricia denied having an affair, Bautista said that in time his camp would show pictures and other evidence to prove his claim.

Bautista claimed that a copy of a draft impeachment complaint  against him was sent to his sister, mother-in-law and cousin to pressure him into paying a huge settlement to his wife.

Bautista said he was willing to give his wife something she deserved.

Patricia claimed in a TV interview on Tuesday that Bautista had given her a list of conditions for agreeing to a settlement.

She said she felt the conditions were holding the settlement “in ransom.”

On Tuesday night, Bautista denied Patricia’s claim, showing the Inquirer a copy of a draft settlement agreement dated May 26, which was put together by their mediator at the time.

The draft indicated that both Bautista and Patricia would commit to taking steps to keep their marital dispute, including terms of their settlement, quiet.

In the TV interview, he showed a demand letter dated Feb. 7, 2017, from his wife’s former lawyer, Lorna Kapunan, asking for P620 million.

As for his properties, Bautista said he declared all that belonged to him in his statement of assets, liabilities and net worth (SALN). “I did not lie in my SALN.”

“It’s also not true that she is not part of these properties because I am married to her. She keeps saying I was hiding properties, not true,” he added.

He described as “complete falsehood” Patricia’s allegation that P500,000 was funneled to his Luzon Development Bank account every day.

The checks from Smartmatic lawyer Nilo Divina, he pointed out, were payment for properties that the lawyer bought from the Bautistas.

Bautista claimed he did not receive a commission from Smartmatic, the supplier of vote counting machines since the 2010 polls.

The mother of Patricia, Baby Cruz Vazquez, broke her silence on the Bautistas’ marital troubles.

“I am greatly saddened by recent events involving my daughter Trisha and her husband Andy. As a mother, you always wish happiness for your daughter and her family. Sadly, fairy tales sometimes

do not always come true,” she said in a statement posted on Facebook.

“It also pains me to see my grandchildren go through this trial that was not of their doing nor of their fault,” she added.

According to her, she has known Bautista for many years, and “I know him to be an honest, upright, God-fearing husband and father.”