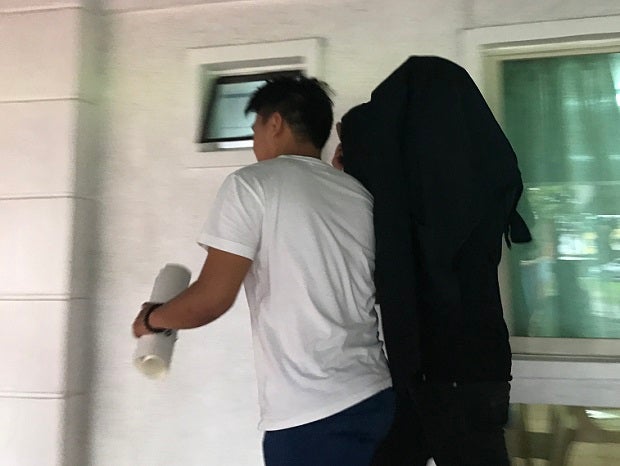 Fr. Arnel Lagarejos (covered in black jacket) is escorted out of the Marikina City Prosecutor’s Office after he was charged with violation of Anti-Trafficking in Persons Act on Saturday, July 29, 2017. (Photo by JODEE A. AGONCILLO / Philippine Daily Inquirer)

Msgr. Arnel Lagarejos, a 55-year-old priest who was arrested while taking a 13-year-old girl to a motel, was released late Tuesday afternoon after posting bail worth P120,000, according to Chief Supt. Romulo Sapitula, Eastern Police District director.

Accompanied by his lawyer, Lagarejos came out of the Marikina City Police Station around 3 p.m.

Lagarejos, parish priest of the Parish of St. John the Baptist in Taytay, Rizal , was accused of violating the Anti-Trafficking in Persons Act.

He underwent inquest proceedings on Saturday afternoon, July 28, following his arrest around 6:30 p.m. near Blue Wave Mall on Sumulong Highway in Barangay Sto. Niño in Marikina.

Citing statements from barangay officials and the victim, Senior Supt. Roger Quesada, chief of the Marikina City Police Station, said the priest had booked the 13-year old minor twice before and was going to the same motel on Sumulong Highway when a police team, accompanied by members of the Department of Social Welfare and Development, intercepted the priest’s gray sport utility vehicle.

Quesada said Lagarejos was seen giving a 16-year-old pimp P500 inside his vehicle. Then the pimp got down, leaving the girl alone with Lagarejos.

Lagarejos, who is under the Diocese of Antipolo, has been relieved of all his duties in the parish and the  Cainta Catholic College (CCC), where he was president.

The arrest was based on a complaint from the victim’s mother, who reportedly saw their conversations on Facebook Messenger, the police chief said.

Inquirer called the mother on Tuesday, but she declined to comment, saying that she was “waiting for the proper time.”

Also on Tuesday, the diocese said it had offered counseling and psychological services to the girl.

“Whatever counseling and psychological services may be available in the diocese, we offer in sincere love, affection and compassion to the child, who, it is our understanding, has been in the keeping of traffickers in the past,” the diocese said in a statement.

“The Diocese has received the news of our priest’s arrest and detention with sorrow, with sympathy for the trafficked child and her parents,” it added.

“It condemns in the strongest terms possible the trafficking of persons,” it said, noting that the allegation against Lagarejos was serious. “Even as his guilt remains to be proved and the precepts of the Constitution grant him the presumption of innocence, the Diocese has taken every step to hold him answerable for the charges brought against him both before the Republic and before the Church.”

Lagarejos’ credentials, as listed in the CCC website, include a doctorate degree in Moral Theology from the Pontifical Gregorian University in Rome.

Lagarejos was the former parish priest of the Our Lady of Abandoned Parish also in Cainta. /atm