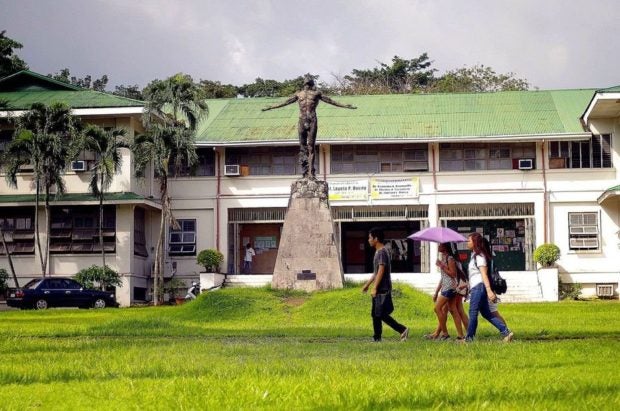 The University of the Philippines Los Baños campus in Laguna. (Photo from UPLB.EDU.PH)

SAN PEDRO CITY – Students of the University of the Philippines in Los Baños (UPLB) will hold a protest rally on Wedneday, in time for the start of the school year.

This was their reaction after the university announced that it would proceed with the collection of tuition from its undergraduate students this semester, despite earlier proposals by the government to subsidize tertiary education.

In his July 28 and 31 memoranda, UP President Danilo Concepcion said UP will use the existing Socialized Tuition System (STS) for academic year 2017-2018 “in the assessment of the tuition and other fees and to provide financial support to students from low-income households.”

“This memorandum supersedes all previous issuances,” the July 31 memorandum read.

In a telephone interview on Tuesday, UPLB Vice Chancellor Portia Lapitan said UPLB was “lifting” the suspension of tuition collection in light of the guidelines issued by Concepcion.

UP Diliman and UPLB earlier did not collect any student fee during enrollment pending clarification from the Commission on Higher Education and the Department of Budget and Management.

The House of Representatives had approved an P8.3-billion budget in 2017 to subsidize tertiary education in state colleges and universities (SUCs), but Lapitan said the allocation for UP system was not enough to cover all undergraduate students in all eight UP constituent universities.

The proposed 2018 national budget, meanwhile, no longer includes a special provision for SUCs.

“They are playing us for fools. We thought it’s free,” said Charm Maranan, chairperson of UPLB University Student Council.

“After keeping everyone in the dark… paasa lang (it was just false hopes),” said Mackie Valenzuela, an Applied Mathematics junior student .

Maranan said STS, one of UP’s tuition subsidy schemes, is a “flawed system” since a student is given tuition discounts based on his paying capacity.

Under STS, a student has to apply and present proof of his family’s financial incapacity in order to qualify for subsidy.

“Under STS, you are rich until proven poor [which is] totally discriminating,” Maranan said. “The baseline is education is a social basic right guaranteed by the Constitution.” /atm