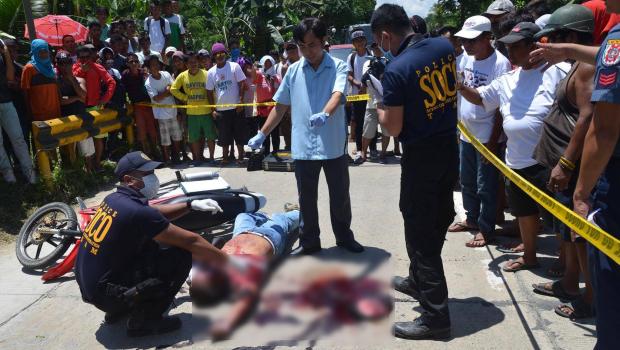 Police officers from the Scene of the Crime Operatives process the crime scene where one of the two men on board a motorcycle shot dead Hegino Gaspay in Barangay A. Tumamak, Villaba town in Leyte on Monday, July 31, 2017. (Photo by Robert Dejon / Inquirer Visayas)

VILLABA, Leyte — A police officer who was dismissed for going on absence without official leave (AWOL) was gunned down by one of the two men on board a motorcycle about 7 a.m. on Monday in Barangay A. Tumamak here in Villaba town.

Gaspay was on his way to the municipal hall to report for work after bringing his child to school when he was waylaid along the national highway in Barangay A. Tumamak.

One of the two men on board the motorcycle shot the victim before speeding off.

Gaspay died on the spot.

Faith Claridel Monier, the victim’s common-law wife, said that before the ambush, they noticed that several motorcycles would pass by their house in Barangay Libagong, Villaba.

But they chose to ignore them. /atm