Floods made worse by garbage—EcoWaste 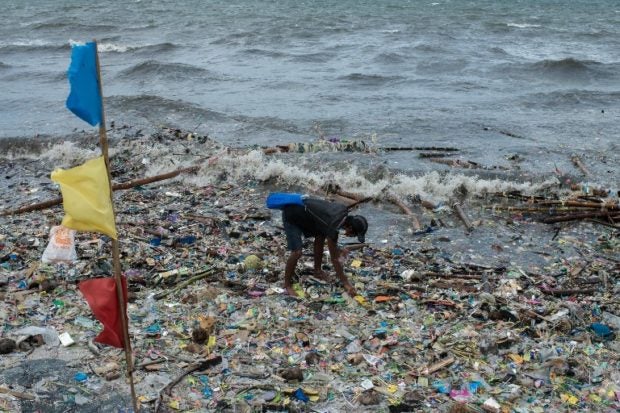 A man picks up garbage washed ashore at Manila Bay on July 29, 2017 after Typhoon Nesat hit the Philippines. AFP

A waste and pollution watchdog deplored on Saturday the reckless waste disposal of cities in Metro Manila which worsened the floods triggered by monsoon rains enhanced by Typhoon Gorio (international name: Nesat).

“The rainwater will not drain fast enough to Pasig River and its tributaries if the storm drains and creeks are clogged with trash,” said Daniel Alejandre, Zero Waste Campaigner of EcoWaste Coalition.

Alejandre pointed out that many are yet to realize how waste disposal could affect them.

“It doesn’t take a rocket scientist to grasp the need to keep the waterways free of rubbish and debris to allow the water to freely flow and minimize flooding, but many have yet to realize what we recklessly throw on the ground or estero (creek) will come back to haunt and harm us,” he said.

A recent report from the Manila Development Authority (MMDA), cited by Alejandre, showed that 757 truckloads of trash and silt, or about 5,250 cubic meters, were removed from various waterways from March 1 to May 17, 2017.

Based on the estimates of the National Solid Waste Management Commission, the country generates 40,087 tons of trash daily, 9,213 tons of which comes from Metro Manila’s 17 local government units.

“Flood pumping stations cannot mitigate flood events if these are blocked with trash,” he added.

To prevent floodings, the EcoWaste Coalition appealed to the public to stop throwing garbage in the streets and waterways, and to practice recycling and segregation instead.

The group also urged the public as well as government authorities to follow and enforce Republic Act No. 9003, or the Ecological Solid Waste Management Act. IDL