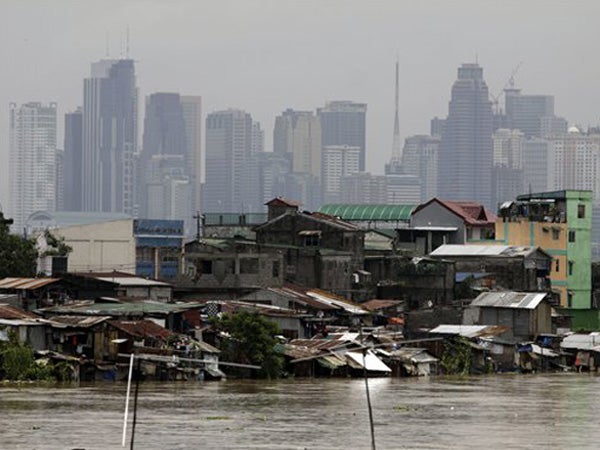 Shanties built along the bank of the river are submerged under flood water as a river overflows in suburban Cainta City, east of Manila, Philippines, Thursday, Aug. 9, 2012. A government report released in 2009 called for 2.7 million people in shantytowns to be moved from “danger zones” alongside riverbanks, lakes and sewers. But squatter communities in danger zones have in fact grown since 2009. AP /PAT ROQUE

MANILA, Philippines—Deadly floods that have swamped nearly all of the Philippine capital are less a natural disaster and more the result of poor planning, lax enforcement and political self-interest, experts say.

Damaged watersheds, massive squatter colonies living in danger zones and the neglect of drainage systems are some of the factors that have made the chaotic city of 15 million people much more vulnerable to enormous floods.

Urban planner Nathaniel Einseidel said the Philippines had enough technical know-how and could find the necessary financing to solve the problem, but there was no vision or political will.

“It’s a lack of appreciation for the benefits of long-term plans. It’s a vicious cycle when the planning, the policies and enforcement are not very well synchronized,” said Einseidel, who was Manila’s planning chief in1979-89.

“I haven’t heard of a local government, a town or city that has a comprehensive drainage masterplan.”

Eighty percent of Manila was this week covered in waters that in some parts were nearly two meters (six feet and six inches) deep, after more than a normal August’s worth of rain was dumped on the city in 48 hours.

Twenty people have died and two million others have been affected, according to the government.

The deluge was similar to one in 2009, a disaster that claimed more than 460 lives and prompted pledges from government leaders to make the city more resistant to floods.

A government report released then called for 2.7 million people in shantytowns to be moved from “danger zones” alongside riverbanks, lakes and sewers.

Squatters, attracted by economic opportunities in the city, often build shanties on river banks, storm drains and canals, dumping garbage and impeding the flow of waterways.

The plan would have affected one in five Manila residents and taken 10 years and P130 billion ($3.11 billion) to implement.

But squatter communities in danger zones have in fact grown since 2009.

“With the increasing number of people occupying danger zones, it is inevitable there are a lot people who are endangered when these things happen,” Einseidel said.

He blamed the phenomenon on poor enforcement of regulations banning building along creeks and floodways, with local politicians often wanting to keep squatters in their communities to secure their votes at election time.

Meanwhile, on the outskirts of Manila, vital forested areas have been destroyed to make way for housing developments catering to growing middle and upper classes, according to architect Paulo Alcazaren.

Alcazeren, who is also an urban planner, said the patchwork political structure of Manila had made things even harder.

The capital is actually made up of 16 cities and towns, each with its own government, and they often carry out infrastructure programs – such as man-made and natural drainage protection – without coordination.

“Individual cities can never solve the problem. They can only mitigate. If you want to govern properly, you must re-draw or overlay existing political boundaries,” he said.

Solutions to the flooding will require massive efforts such as re-planting in natural drainage basins, building low-cost housing for the squatters and clearing man-made drainage systems, the experts said.

“It will cost billions of pesos but we lose billions anyway every time it floods,” Alcazeren said.

Meanwhile, with Environment Secretary Ramon Paje warning that intense rains like those this week will become the “new normal” due to climate change, there have been concerns about the city’s ability to lure and keep foreign investors.

“Companies will continue to invest in the Philippines for all its positive qualities,” he said, citing well-trained Filipino staff and pointing out there were key parts of the city with good infrastructure that did not badly flood.

Jennings highlighted the rise of the outsourcing sector in the Philippines as evidence that foreigners would not abandon the country because of floods.

Companies such as JP Morgan, Deutsche Bank and Accenture have all set up backroom operations in recent years, mostly in slick new parts of Manila where infrastructure is state-of-the-art and which did not flood this week.

From virtually nothing a decade ago, 600,000 people are now employed in the outsourcing sector and the industy is expecting that number to more than double by 2016 as more foreign firms move in.