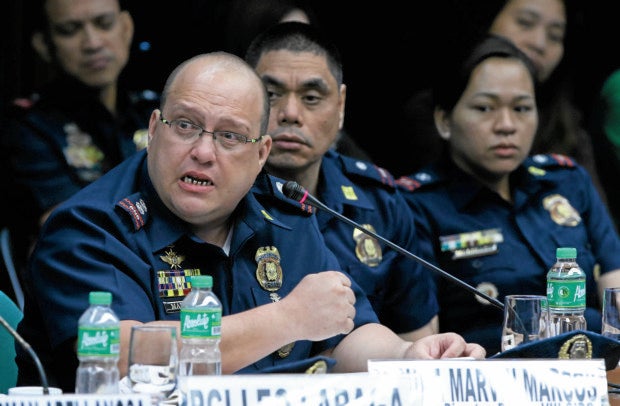 Supt. Marvin Marcos should have declined his new assignment to protect the Philippine National Police (PNP) from criticism, Senator Panfilo Lacson said this on Thursday.

“He shouldn’t have accepted the assignment in the first place if he had the wisdom and sensitiveness to save his superiors and the PNP as an institution from criticisms,” Lacson said in a text message.

Lacson was reacting to a fellow senator’s call for Marcos to go on a voluntary leave “out of delicadeza.”

Earlier, Senator JV Ejercito, in a Twitter post, said “Marcos is a liability for the PNP and becoming too hot to handle.”

“Huwag na tayo umasa. How can you expect delicadeza if a person does not even tell the truth,” Poe said in a text message.

Senate Minority Leader Franklin Drilon, for his part, said Marcos shouldn’t go on a leave but should instead be dismissed.

Marcos and 18 of his men, all former members of the Criminal Investigation and Detection Group (CIDG) in Region 8 (Eastern Visayas), led a raid inside the Baybay City jail in Leyte last year that resulted in the death of Albuera, Leyte Mayor Rolando Espinosa Sr. and fellow inmate Raul Yap.

Both the Senate and the National Bureau of Investigation (NBI) concluded that the killing was premeditated and the operation against Espinosa was a rubout.

Marcos and his group were charged with murder but the Department of Justice later downgraded the charges to homicide, allowing them to post bail.

President Duterte then ordered PNP chief Director General Ronald “Bato” Dela Rosa to bring Marcos and 18 other policemen to service because it would be a waste for the government to pay them without working.

On Wednesday, two Senate committees probed the controversial reinstatement of Marcos. There, Dela Rosa reiterated that he was just following orders from the President to reassign Marcos to the CIDG Region 12 (Soccksargen).

Both Lacson and Drilon said the hearing confirmed that there was an “obvious cover-up” for Marcos’s group.