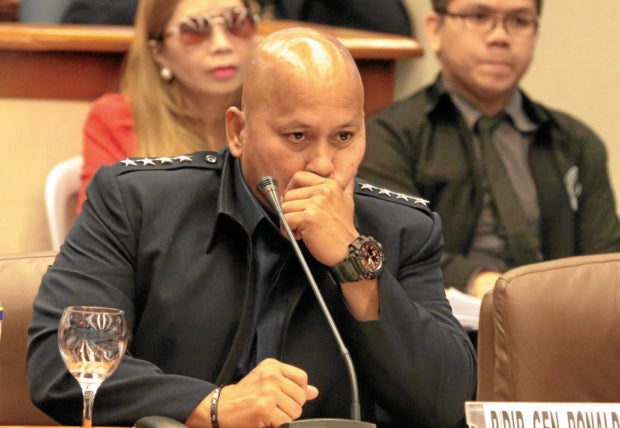 ‘NOT SO NORMAL’PNP Director General Ronald dela Rosa admits during the Senate hearing on Wednesday that it is “not so normal” for a police official involved in a highly controversial case to be sent back to the front lines. —GRIG C. MONTEGRANDE

Supt. Marvin Marcos, who is implicated in the killing of Mayor Rolando Espinosa Sr. of Albuera, Leyte, is vying for a promotion amid suspicions of a cover-up following the Department of Justice (DOJ) decision downgrading the charges against him to a lighter and bailable offense.

During Wednesday’s hearing of the Senate committee on public order and dangerous drugs, Sen. Panfilo Lacson expressed suspicion that Marcos was reassigned to the Criminal Investigation and Detection Group (CIDG) in Region 12 (Soccsksargen) so he could be promoted to senior superintendent in six months, the required residency for the higher rank.

Philippine National Police Director General Ronald dela Rosa confirmed this at the hearing.  He later told reporters that Marcos would likely get the promotion, especially if no administrative sanctions would be imposed on him.

Marcos and his 18 coaccused in the killing of Espinosa and another inmate during a warrant raid in November last year had been automatically placed on leave of absence when they were charged with murder and detained on court orders. But when the case was downgraded to homicide,  the policemen were allowed to post bail.

Marcos’ leave of absence was lifted on July 11, a day after President Duterte expressed his wish that Marcos and his men involved in the raid on the Baybay, Leyte, subprovincial jail be returned to active duty.

The superintendent was then eventually assigned as officer in charge of the CIDG regional office in Soccsksargen.

“We are trying to elicit information from General Dela Rosa on what can be done with the situation. The reason why I mentioned that is to preempt whatever their plans are because Superintendent Marcos was given an entry point for promotion,” Lacson, the committee chair, told reporters.

“Now at least, I made them conscious that the Senate is on guard,” said Lacson, a former PNP chief.

The DOJ decision downgrading the charges was contrary to the findings of the Senate as well as the recommendation of the National Bureau of Investigation and a panel of the National Prosecution Service that the killing of Espinosa, tagged by Mr. Duterte as a major drug distributor, was premeditated.

Senate Minority Leader Franklin Drilon said the hearing confirmed that there was a “deliberate cover-up” to allow Marcos and his men to be reinstated and to be able to post bail.

“They don’t want to charge him with murder … If the finding showed that he committed murder, this could mean dismissal from service and therefore, the cover-up is that he should stay in service,” Drilon told reporters.

At the hearing, Drilon took note of Justice Undersecretary Reynante Orceo’s failure to explain in full his resolution downgrading the murder charge to homicide.

Upon questioning, Orceo said the committee report and the resolution adopted by the entire Senate did not figure in his recommendation and that he was not aware of the opinion of Justice Secretary Vitaliano Aguirre II during the Senate hearing last year. Aguirre had earlier agreed that the killing of Espinosa was premeditated.

“The secretary doesn’t have any hand in the draft of this resolution. He did not intervene, I personally made it,” Orceo told the committee. He said he had a different appreciation of the same facts and evidence that were considered by the Senate, the NBI and a panel of DOJ prosecutors.

Drilon pointed out that Orceo could have just left it to the lower court to convict Marcos of homicide.

“But you found it necessary and urgent for you to exercise that judgment and downgrade the case to homicide,” he said.

Lacson agreed that there was an apparent cover-up, pointing out that Orceo went beyond his authority to review the petition filed by Marcos and reverse the charges against him.

He took note of a DOJ circular stating that undersecretaries named in the document could only review appeals or petitions filed from July 1 to Dec. 31, 2016. Marcos’ petition for review was filed on April 5 this year.

“Apparently there’s a cover-up because we saw that there are certain department circulars that don’t jibe,” he said.

At the hearing, Dela Rosa said that his decision to bring back Marcos and his men had nothing to do with Mr. Duterte’s pronouncements but he admitted that it was also “not so normal” for a police official involved in a highly controversial case to be sent back to the front lines.

“If we base it on the pronouncements of the President, it has not affected our decision. Because for the record, he did not call me up to give instructions on whether to absolve or penalize Marcos. He did not meddle,” the PNP chief said.

But Dela Rosa later said that the President “intimated” to him that it would be a waste of government money if Marcos and the other erring policemen were continued to be paid their salaries without working.

“We believe that there were irregularities, that’s why Superintendent Marcos is facing suspension and his men, a one-rank demotion because they have a liability,” Dela Rosa said.

“But reverting them to duty is a different matter. Technically they can be deployed because they are in full-duty status … so I see no reason for me not to obey the orders of the President,” he added.