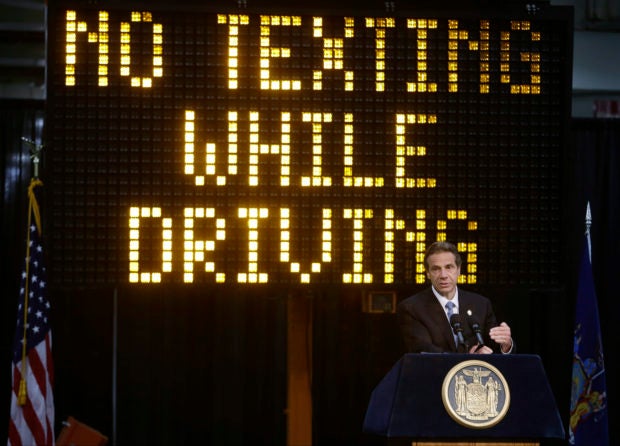 In this May 31, 2013, file photo, New York Gov. Andrew Cuomo speaks during a news conference to announce the increase in penalties for texting while driving in New York. New York state is set to study the use of a device known as the “textalyzer” that would allow police to determine whether a motorist involved in a serious crash was texting while driving. Cuomo announced Wednesday, July 26, 2017, that he would direct the Governor’s Traffic Safety Committee to examine the technology, as well as the privacy and constitutional questions it could raise. AP

ALBANY, New York, United States — Police in New York state may soon have a high-tech way of catching texting drivers: a device known as a textalyzer that allows an officer to quickly check if a cellphone has been in use before a crash.

Democratic Gov. Andrew Cuomo on Wednesday directed the Governor’s Traffic Safety Committee to examine the technology and the questions about privacy and civil liberties its use would raise.

“Despite laws to ban cellphone use while driving, some motorists still continue to insist on texting behind the wheel — placing themselves and others at substantial risk,” Cuomo said in a statement first reported by The Associated Press. “This review will examine the effectiveness of using this new emerging technology to crack down on this reckless behavior and thoroughly evaluate its implications to ensure we protect the safety and privacy of New Yorkers.”

The device is called the textalyzer because of its similarity to the Breathalyzer, which is used to identify drunken drivers. Once plugged into a person’s phone for about a minute, it will indicate whether a motorist was texting, emailing, surfing the web or otherwise using his or her cellphone before a serious crash.

Supporters of the technology say the officer would not be able to access personal information on the phone, such as pictures, emails or web browsing history.

The technology is still some months away from being ready, according to Cellebrite, the Israel-based tech company developing the device.

Digital privacy and civil liberties groups already have questioned whether the technology’s use would violate personal privacy, noting that police can already obtain search warrants if they believe information on a private phone could be useful in a prosecution.

Many security experts are skeptical when it comes to promises that the textalyzer would only access information about phone usage, and not personal material, according to Rainey Reitman, of the Electronic Frontier Foundation, a nonprofit organization that advocates for civil liberties when it comes to digital technology.

“I am extremely nervous about handing a cellphone to a law enforcement officer and allowing them in any way to forensically analyze it,” she said. “This is a technology that is incredibly problematic and at the same time is unnecessary. There are already legal avenues for a police officer.”

Westchester County resident Ben Lieberman lost his 19-year-old son Evan Lieberman to a fatal car crash in 2011 and later discovered the driver of the car his son was in had been texting while driving. He’s now a leading advocate for the textalyzer and has worked with Cellebrite on the project. He said he understands concerns about privacy but they’re unfounded, noting the device would only tell police whether a driver had been breaking the law.

Count Emily Boedigheimer as a supporter of the idea. The Albany area resident said she’s fine with police using a textalyzer, as long as there are rules about what police would be able to see.

“If you’re texting and driving you’re breaking the law and you’re risking people’s lives,” she said during a lunchtime walk in downtown Albany on Wednesday. “Why can’t you wait, or pull over, to make that one call or read your texts?”

The committee will hear from supporters and opponents of the technology, law enforcement officials and legal experts before issuing a report, Cuomo’s office said. Particular areas of focus will include the effectiveness of the technology, constitutional and legal issues and how the device would be used in practice.

Sen. Terrence Murphy, a Westchester County Republican, this year sponsored legislation that would have set out rules for the use of the textalyzer. The bill didn’t get a full vote, but Murphy said he believes it’s only a matter of time before New York and other states adopt the technology.

Under Murphy’s bill, motorists who refuse to hand over their phones to officers could have their licenses suspended.

Twelve people were killed and 2,784 were injured in cellphone-related crashes in New York state from 2011 to 2015, according to figures from the Institute for Traffic Safety Management and Research. State statistics show 1.2 million tickets for cellphone violations were issued in that period. CBB/rga