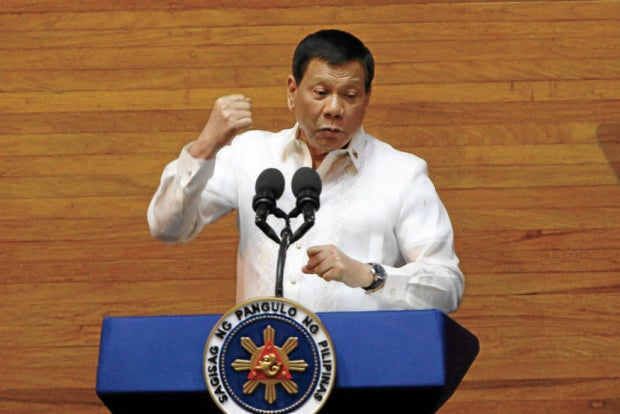 While President Rodrigo Duterte dedicated a large chunk of his second State of the Nation Address (Sona) to chastise and issue warnings against environmentally destructive mining operations, green advocates remain unimpressed until the words are actually translated into actions.

“President Duterte gives the same old lip service on mining and the environment that is lacking in substance. It is nothing significantly different from the hollow promises he ranted about in his first State of the Nation Address,” the Kalikasan Philippine Network for the Environment (Kalikasan-PNE) said, in a scathing statement on Tuesday.

Lopez, Duterte’s first choice as Environment secretary, failed to secure confirmation from the Commission of Appointments after she had ordered the closure and suspension of 28 mining operations across the country.

None of the orders have actually been implemented pending appeals filed mostly in the Office of the President. Cimatu also has not acted on appeals filed in the Department of Environment and Natural Resources.

“Duterte should start walking his cheap talk by taking large-scale foreign mining companies to task by upholding the mining closures, suspensions and agreement cancelation orders issued by Lopez. These orders have been stuck in the Office of the President, and it only needs the political will of someone who is honestly against the big foreign mines,” the Kalikasan PNE-said.

The Alyansa Tigil Mina (ATM, Anti-Mining Alliance) was milder in its reminders for action to the President: “We expect President Duterte to issue clear instructions to the DENR to strictly enforce the closure and suspension orders….Meanwhile, our alliance recommends that President Duterte immediately issue an Executive Order declaring a moratorium on all mining applications and operations.”

Duterte, during his Sona on Monday, dedicated a lengthy portion to express his stance on mining, echoing similar statements made by Lopez during her short stint as Environment secretary.

“Responsible, regulated and sustainable development is what we advocate and require. The protection of the environment must be made a priority ahead of mining…And this policy is non-negotiable….I am warning all mining operations and contractors to refrain from the unbridled and irresponsible destruction of our watersheds, forests, and aquatic resources,” Duterte said.

Duterte even expressed plans to increase taxes on mining firms for compensation “for the damage,” and warned the companies to declare their correct income and pay correct taxes.” “Otherwise, I‘ll have to stop mining. I will ask you to stop it. It‘s not good,” Duterte said.

Duterte also ordered local government units to “do your job” of monitoring mining operations “without fear or favor.” “I [hold] you absolutely responsible for any misdeed or failure [by] the mining entities to comply [to regulations],” the President warned.

The ATM expressed gratitude for such pronouncements. “We remind Secretary Cimatu that he has to listen carefully to the pronouncements of President Duterte,” the ATM statement read. The group also promised to expose politicians “compromised” by conflict of interests related to mining.

“We expect Congress to heed the President’s call to t fast-track the enactment of a new mining law,” ATM added.

“The President missed the opportunity to rouse and rally the mayors and the citizenry about the urgent need to step up waste prevention and reduction strategies to clean up the entire country, including banning single-use plastic bags, enforcing the regulations against open dumping, open burning and waste incineration, and reversing the rise of burn or thermal ‘waste-to-energy’ disposal technologies,” said Aileen Lucero, EcoWaste Coalition national coordinator.