Duterte challenged to go beyond rhetoric vs mining 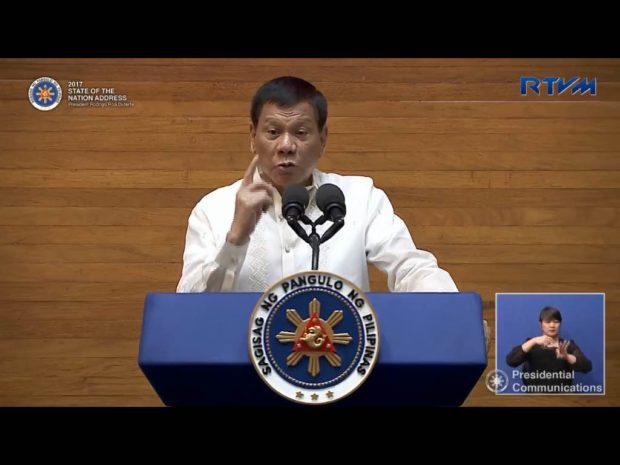 President Rodrigo Duterte delivers his second State of the Nation Address on July 24, 2017. (SCREENGRAB FROM AN RTVM VIDEO)

“The President’s hopes and dreams on environment are commendable but he needs to get rid of his officials who had and have interests in the mining industry. We hope National Land Use Act shall be enacted as a law by Congress, so do with Forest Resources and Alternative Mineral Management bills,” said Rodney Galicha, an environmental activist from Romblon and the Climate Reality Project Philippines manager.

In Occidental Mindoro, Ian delos Santos, a Christian pastor and spokesperson of the Kaisahan ng mga Mindoreño Laban sa Dayuhan at Dambuhulang Pagmimina, also lauded Duterte’s pronouncement but said that they would rather push for national industrialization.

Earlier on Monday, around 500 farmers and activists staged protests in Sablayan and San Jose Occidental Mindoro and in Roxas,Oriental Mindoro against the continued presence of foreign and large-scale mining companies on their island.

“We have lost bearings on President Rodrigo Duterte’s promise to close big mines that have actually caused or are posing massive destruction of the environment. It is not enough to say protect the environment, but President Duterte should be clear-cut in saying “close the big mines,” said Bagong Alyansang Makabayan in Mindoro in reaction to Duterte’s State of the Nation Address.

The group said the President has always expressed his “disgust” against mining but they have not seen him act on it.  SFM