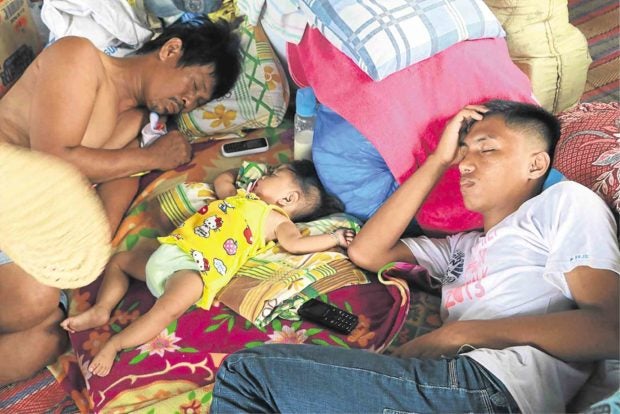 YEARNING FOR HOME Evacuees from Marawi City take shelter at a school gymnasium in Iligan City as they wait for government clearance to return to their war-torn hometown. —BARRY OHAYLAN

“Mr. President, please let us end the war now,” Maranao youth leader Omeihaya Sharief said in a State of the Bakwit Address (Soba) she delivered on behalf of the families displaced by the two-month siege on Marawi City by Islamic State (IS)-linked militants.

The Soba was timed with President Duterte’s State of the Nation Address on Monday.

A movement called Dansalan Tano sa Kalilintad (Let’s return to a peaceful Marawi) has emerged among Marawi evacuees here. Led by Muslim religious and traditional leaders, the movement is asking the government to end the war soon so the displaced Maranaos can go back to Marawi and start rebuilding their lives.

Government figures show that the ongoing war has displaced more than 460,000 people with only about 30,000 staying in evacuation centers and the rest living with relatives outside of Marawi.

About 100,000 of these evacuees are staying in Iligan City.

“As the war continues, so are the hardships of the evacuees,” Sharief pointed out.

“Despite the official pronouncements of authorities, many home-based evacuees continue to be wanting of food, that is why their children are prone to diseases and ailments,” she said.

“Those in evacuation centers [endure] crowding, the heat during daytime and the cold at night from the [concrete] floor where they sleep. They are also tired of eating canned sardines and cup noodles,” she added.

“Because of the difficult situation they have to bear, the evacuees are experiencing a high level of stress. They need psychosocial care so they can think beyond the current situation and plan how to move on with their lives,” Sharief said.

Pascal Porchet, head of delegation of the International Committee of the Red Cross in the Philippines, acknowledged the continuing difficulties faced by evacuees.

Porchet particularly cited the “critical situation” faced by evacuee families and their hosts.

“They are also running out of means. They have been very generous, they have shown a lot of solidarity, but as the situation continues, they are getting desperate,” Porchet said.

“Those living in these situations, they are desperate to … go home,” he added.

Drieza Lininding, secretary general of Bangsamoro National Movement for Peace and Development, said the Maranaos would like to return to areas of Marawi which had been declared safe by the military.

This coverage area was half the estimate given by Lt. Col. Jo-Ar Herrera, Joint Task Force Marawi spokesperson, three weeks ago.

Sharief said: “Our hearts broke seeing on television the daily destruction wrought to our beloved Marawi due to the continued fighting.”

“We are anxious [in hearing] every news [report] of bombing runs as these could be hitting our houses or stores that our parents had worked hard to put up,” she added.

“Until now, we continue to grapple with the questions: ‘Why is the government doing this to the Maranaos? If the siege happened in another place, say Cebu, would it do what it had done to Marawi?’” Sharief said.

She said even the total destruction of Marawi would not spell the end of the problem of violent extremism and radicalism purveyed by IS.

“One, their top leaders have already escaped. Two, we continue to face the social problems that breed recruits into their fold,” she said.

According to Sharief, majority of Maranaos have never supported the presence of IS militants in Marawi and their takeover of the city, hence, they are against the government’s move to negotiate political concessions with them.

“What we asked of you, Mr. President, was to allow our traditional and religious leaders to drive them out of Marawi so that it would be spared from ruin. But you never listened to us,” she said.

“That is why in the last six weeks, the militarist approach was dominant in the search for solutions to the crisis,” she added.

Sharief noted that IS militants had long threatened to wreak havoc on Marawi should the Maranaos continue to refuse IS’ brand of Islam.

“As it turned out, the government helped the IS militants achieve their goal,” she said.