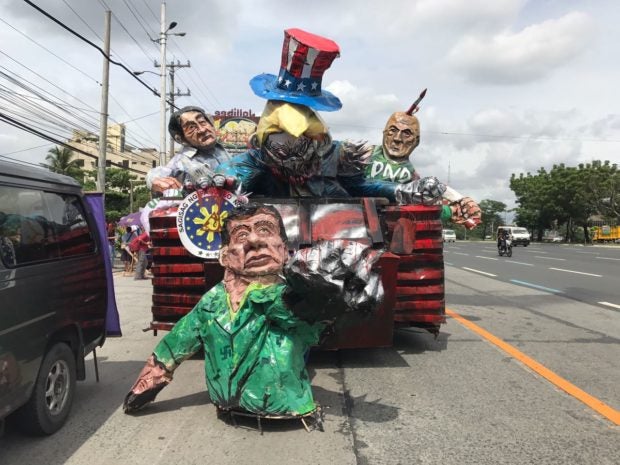 Bagong Alyansang Makabayan (Bayan) paraded on Monday an effigy of President Rodrigo Duterte leading a blood-spattered military tank with the images of Defense Secretary Delfin Lorenzana, Finance Secretary Carlos Dominguez and of Uncle Sam prior to the second State of the Nation Address of President Rodrigo Duterte. The militant group said the effigy represents ‘political and economic repression’ under Duterte. JHOANNA BALLARAN

Protesters brought back effigies as the centerpiece of this year’s State of the Nation Address (Sona).

The tank, a hybrid bulldozer-APC with tractor wheels, symbolized both the martial law in Mindanao and the backward agricultural sector, Almuena said.

Uncle Sam, on the other hand, represented the superpower’s political and economic control of the country.

Last year, Sona protesters took a break from making an effigy as a sign of support to newly-elected Duterte. They instead paraded a six-panel mural that reflected their aspirations under the new government.

But as the peace talks with the National Democratic Front collapsed a year later, Bayan promised to step up their protest to “deliver strong message” to Duterte.

The group will not say yet if they will burn the the president’s effigy after his speech, a tradition it has held under the previous administrations. CBB