Thousands of protesters begin march to Batasan ahead of Sona 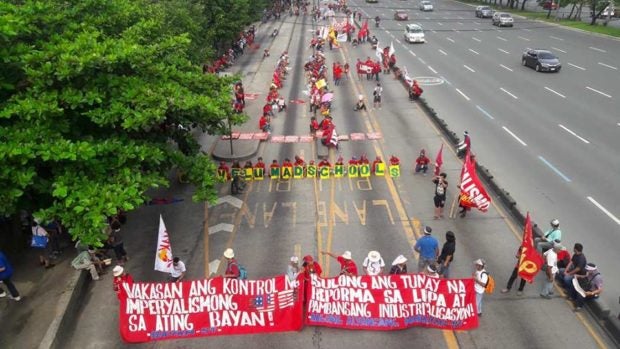 Militant groups march along Commonwealth Ave. to converge at Batasan, Quezon City to protest against President Rodrigo Duterte’s second State of the Nation Address. Photo by Jes Cosio/Radyo Inquirer 990am

Militant groups, after a short program in front of the Department of Agriculture, marched towards Commonwealth Avenue bearing banners and flags condemning the present administration’s lack of genuine land reform.

Thousands of Kadamay members also convened at the National Housing Authority before marching towards the Batasan.

Joining the demonstrations are employees of Intercontinental Broadcasting Corporation’s (IBC-13), who are demanding for security of tenure in their jobs.

Groups supporting Duterte are also set to conduct their own program to express their allegiance to the chief executive.

Chief Supt. Guillermo Eleazar, in an interview on dzMM TeleRadyo, said east-bound lanes of Batasan Road and the north-bound lanes of Commonwealth will be closed for protesters.