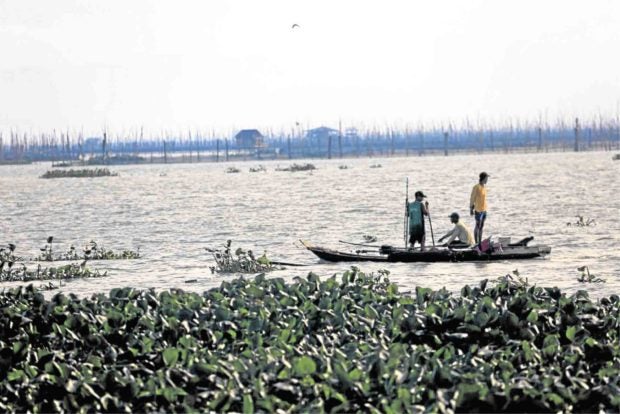 “I’m sure President Duterte meant well,” Machado said. “But they’re still there. Not every single one was removed.”

Like Machado, Reynaldo Marmeto, who has been fishing in the lake for the last 17 years, hopes to see the fish pens gone.

“If [Mr. Duterte] could really remove the big ones, that would be good for us,” he said.

The rehabilitation of the 90,000-ha Laguna de Bay, the country’s largest freshwater body, is one of the major environmental programs of the Duterte administration.

In his first State of the Nation Address (Sona), Mr. Duterte said he wanted the lake transformed into a “vibrant economic zone” by addressing issues on watershed destruction, land conversion and pollution.

The fish pens and cages, choking the lake for decades, also caught the President’s eye. He said he wanted the small, poor fishermen prioritized in terms of access to the natural resource.

“If you review what [Mr. Duterte said in his Sona], he wanted to reduce the area occupied [by fish pens]. He didn’t say remove everything,” said Jaime Medina, general manager of the Laguna Lake Development Authority (LLDA).

The lake aquaculture has become a multimillion-peso business since the 1970s. The industry supplies 200,000 metric tons of bangus and tilapia annually to Luzon and parts of the Visayas.

Fish pen operators, many of them wealthy businessmen, were first to oppose a “zero fish pen” policy.

The operators had also opposed the confirmation of Gina Lopez as secretary of the Department of Environment and Natural Resources (DENR), noting that with Lopez in office, drastic measures would be taken to clean up the lake.

Lopez, who once spearheaded the rehabilitation of the Pasig River, created a National Anti Environmental Crime Task Force headed by former Undersecretary Arturo Valdez to oversee the demolition of illegal fish pens.

Her team also came up with a Rapid Rehabilitation Plan to address issues like the overcrowding of fish pens, illegal reclamation, industrial pollution and domestic sewage, proliferation of water hyacinth, and sedimentation.

The Inquirer noted at least five major demolitions of illegal fish pens since August—with the latest on June 29.

Among the structures demolished belonged to the Seven Eleven Fishing Corp., Christian Fishing Corp., East West Fishing Corp. and the Habagat Multipurpose Cooperative. These pens lacked permits or its operators had been delinquent in paying government fees.

Most of these are located in parts of Binangonan and Cardona towns in Rizal province and in Muntinlupa City in Metro Manila.

In January, the LLDA imposed a one-year moratorium on the issuance of permits for fish pen and cage operators. It gave them until March 31 to harvest stocks and “self demolish,” lest their fish pens, made of bamboo poles, anahaw leaves and massive fish nets, be sequestered by the government.

The fisherfolk group Pambansang Lakas ng Kilusang Mamamalakaya ng Pilipinas (Pamalakaya) said the demolitions were one of the Duterte administration’s “prominent achievements.” However, the group said that success was “too small.”

“Many things happened under Gina [Lopez] but after that, we didn’t hear much [about the lake rehabilitation] anymore,” said Pamalakaya chair Fernando Hicap.

In May, the Commission on Appointments rejected Lopez’s appointment to the DENR. She was replaced by former Armed Forces of the Philippines chief of staff, Roy Cimatu, on May 8.

Lopez was removed from the government along with Valdez and several of her appointees.

A fish pen operator from Binangonan, who declined to be named due to the sensitivity of the issue, said things turned more “lenient” when Cimatu took over.

But he still credited the Duterte administration for taking the lake cleanup seriously.

Medina, a former mayor of Pateros who replaced LLDA general manager Nereus Acosta on Jan. 23, said the government had demolished illegal fishing structures covering 1,600 ha of the lake since Mr. Duterte assumed office. The LLDA targets to free up 3,000 ha more toward the end of this year to bring down the occupied area to 9,200 ha.

The pens used to occupy over 12,000 ha of the surface water, exceeding the 9,200-ha lake carrying capacity determined by experts.

“For every hectare of aquaculture, 7 to 8 ha must be free,” Medina said.

Operations of the remaining fish pens, which complied with government regulations, were allowed to resume seeding last month. While they were still not issued the permits, the operators were asked to pay P6,000 per hectare for the use of the lake’s resources.

“When Gina [Lopez] ordered everything stopped, people thought there wouldn’t be any seeding to happen this year. The ponds in Bulacan supplying us the fingerlings did not prepare [enough stock] so there’s a shortage of bangus fingerlings now,” the operator said.

The LLDA said the government spent roughly P500,000 to dismantle a 50-ha fish pen. Since the process is costly and tedious, the government and operators reached a consensus to self demolish and downsize their pens from hundreds of hectares to just 25 ha per owner.

“They [eventually] agreed to it, rather than they lose everything,” said Emiterio Hernandez of the LLDA’s Environmental Regulatory Department.

“We are not stopping,” Medina said.

He said the LLDA was looking at other things in the lake. “No matter how much you demolish, if you don’t clean up the water [it becomes pointless].”

Medina said the LLDA’s legal team was preparing to identify the industries illegally discharging wastes into the lake.

Other issues he is looking into are the illegal settlers and the illegal reclamation of shorelines.

“Secretary Roy [Cimatu] is asking us for achievable, measurable results,” he said.

Medina said the government was “on target” to fulfill Mr. Duterte’s promise to save the dying Laguna de Bay.