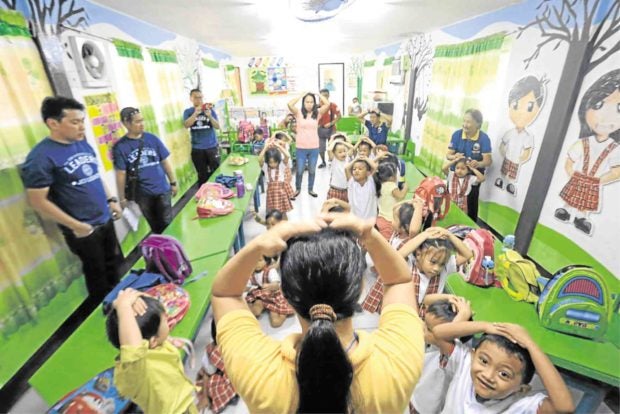 STAYING SAFE Teachers in a day care center in Legazpi City in Albay province guide their pupils on the proper way to protect themselves in case an earthquake strikes. —MARK ALVIC ESPLANA

CITY OF SAN FERNANDO — Don’t just get ready for the Big One, a scenario where a 7.2-magnitude earthquake would rattle Luzon when the the West Valley Fault moves.

Prepare also for any movements along the segments of the Philippine Fault Zone (PFZ), Science Undersecretary Renato Solidum Jr. said, advising 1,000 officials in Pampanga province at a recent multihazards summit organized by the Pampanga Disaster Risk Reduction and Management Council.

The northwestern areas of the province are important to the national government’s disaster response program should Metro Manila, the government and economic centers of the country be paralyzed by a major earthquake, he said.

According to Solidum, Kapampangans must be able to help others being near the Clark Freeport and the Clark International Airport and the seaport and airport in Subic Bay Freeport that are identified lifelines in times of major disasters.

In response, Pampanga Vice Gov. Dennis Pineda has tapped the Department of Trade and Industry to help inspect hardware stores to prevent the sale of substandard construction materials.

Solidum, who is also officer in charge of the Philippine Institute of Volcanology and Seismology (Phivolcs), warned against complacency, saying that while Pampanga does not sit right on the PFZ, it still might feel and suffer the hazards related to earthquakes like liquefaction.

Central Luzon was formed by volcanic sediments, making its foundation soft, he said.

“It isn’t only the Big One that we should worry about. Pampanga is near the segments of the PFZ in Infanta [in Quezon province] and Gabaldon [in Nueva Ecija],” he said.

The West Valley Fault, which lies southwest of Pampanga, last moved in 1658. It spans 100 kilometers from Doña Remedios Trinidad town in Bulacan province all the way to Calamba City in Laguna province.

According to Phivolcs, ground shaking in southeastern Pampanga may kill 200 people. The potential hazard may come from a break in the Angat Dam, also in Bulacan.

The Infanta segment slipped in 1880 while the Gabaldon segment shook in 1641, killing 3,000 people. The Gabaldon segment is near the Digdig Fault that caused the magnitude-7.7 tremor that killed 1,300 people in Cabanatuan City in Nueva Ecija and Baguio City on July 16, 1990.

“It is important to teach our people how to prepare for earthquakes and how to be safe from these,” Solidum said. He called for detailed planning, observing that local governments “don’t have written plans” and have generally been slow to respond to disasters.

The Philippines ranks third among countries that are prone to natural hazards. The country has experienced around 90 destructive earthquakes in the past 400 years.