Assistant prosecutor up for promotion, described as ‘feisty yet peace-loving’
By: Maricar Cinco - Reporter / @maricarcincoINQ
Philippine Daily Inquirer / 06:55 AM July 20, 2017 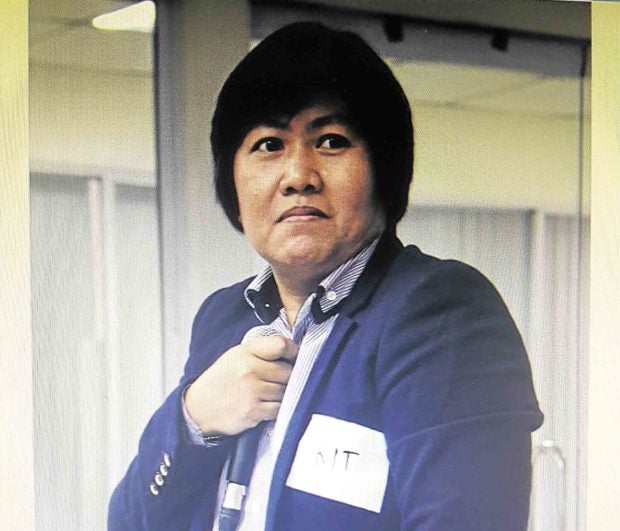 Assistant Prosecutor Maria Ronatay, 46, a native of Libon town in Albay province, was driving her car on her way home to Cainta town in Rizal when attacked by two men on a motorcycle at 5 p.m. on Tuesday on Ortigas Extension in Barangay San Isidro, Taytay town.

Authorities withheld for security reasons the identity of Ronatay’s female passenger, also an employee of the prosecutor’s office.

Delorino said Ronatay’s colleague was unhurt but she had yet to report for work.

“We condemn this brazen and callous attack against a peace-loving woman,” said Rizal provincial prosecutor Raymond Jonathan Lledo in a telephone interview.

He said Ronatay, who had been an assistant prosecutor since 2005, was not handling any “sensitive” case, not even those related to illegal drugs, that could trigger the killing.

“[But] nobody, whatever she did or did not do, deserved this,” he added.

According to the police, Ronatay’s vehicle, a Honda CRV, had slowed down through heavy traffic when the gunmen shot her. The suspects fled toward Taytay’s Kaytikling circumferential road.

Lledo said investigators were collecting footage from security cameras in the vicinity. Police have also called on witnesses whose vehicles were equipped with dash cameras, to come forward and provide footage to help identify the gunmen.

Stickler for the rules

Colleagues described Ronatay as “feisty and a stickler for the rules.”

“Whenever policemen appear unprepared in court [as witnesses], that would really flip her top,” Lledo said.

Lledo said he had recommended Ronatay to be promoted as a senior assistant prosecutor. “Her papers are up for deliberation at the Office of the [Justice] Secretary but unfortunately she already passed away,” he said.

Lledo said Ronatay was “a very private person” and always spoke softly to her coworkers. He said the slain prosecutor refused to carry a gun.

Investigators have started looking into Ronatay’s work and personal affairs in determining a possible motive in the attack. “We’re actually facing a blank wall,” Lledo said.

Justice Secretary Vitaliano Aguirre II ordered the National Bureau of Investigation to conduct its own probe.

Aguirre, in a statement, described Ronatay’s murder as “dastardly and evil.”

“We condemn in the strongest possible terms the evidently premeditated killing of prosecutor Maria Ronatay,” he said.

“Our prosecutors cannot be hapless sitting ducks. We should also take a very serious look at possible ways and means to help our prosecutors obtain licenses to carry firearms as an additional protective measure,” he said. —With a report from Marlon Ramos

Read Next
Still no room for small fishers as pens remain in Laguna de Bay
EDITORS' PICK
vivo brings to the Philippines a powerful smartphone with a slimmer body, the vivo Y02s for only PHP 6,499
Palace: Biggest supermarkets in PH commit to sell sugar at P70 per kilo
What to watch out for when selecting a video surveillance solution
Heads may roll at BOC, says Palace if sugar smugglers are allowed to use recycled import permits
House energy committee chair Arroyo bats for cheap electricity
DOH reports increase in daily COVID-19 deaths, mostly unvaxxed
MOST READ
Brian Poe-Llamanzares receives his PhD in Public Administration
Metro Manila’s No. 1 wanted man arrested, says NCRPO
Alyssa Valdez to miss Creamline’s AVC Cup campaign
DepEd to give teachers P5K cash allowance within first week of classes
Don't miss out on the latest news and information.