PNP chief: No reason to hold 3 Mautes stopped at Naia 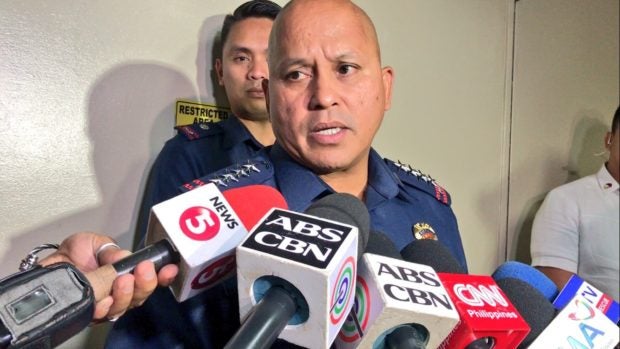 (They didn’t find any reasonable ground to hold them further.  They weren’t able to prove that these people with Maute surnames are with the Mautes who staged a rebellion in Marawi.)

READ: 7 KL-bound persons held at Naia over suspicion of links with Maute

Three of them were released after authorities found that they had not derogatory records.

“As of now they are cleared; that’s why we released them. But if later on ma-find out na ang mga tao pala na iyon ay involved sa gyera sa Marawi then magkakaroon tayo ng reasonable ground na i-hold sila (But if we find out later that these people are involved with the Marawi siege, then we’ll have reasonable ground to hold them),” Dela Rosa said.

He added that completing the three-day investigation was not necessary.

“It doesn’t mean na may binigay sa iyo na three days ubusin mo talaga to the detriment of the innocent people. As of this moment in time, the investigators found out na they are innocent, so bakit mo pahabain yung pagtitiis nila doon sa loob ng detention,” he said.

(It doesn’t mean that since they were given three day, they need to complete it to the detriment of the innocent people. As of this moment in time, the investigators found out they are innocent, so why extend their suffering inside detention.) Frances Mangosing/JE