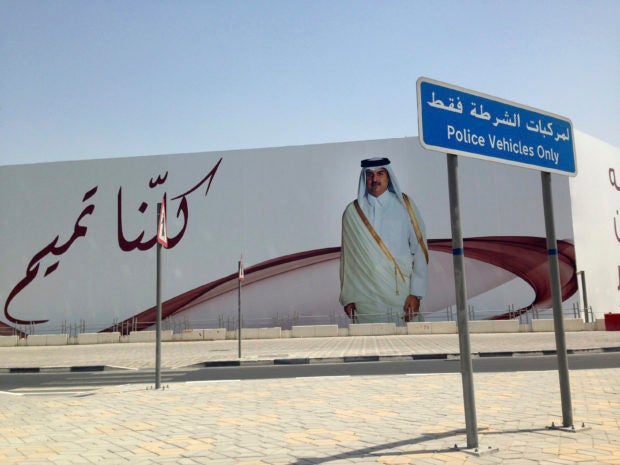 FILE- In this Monday, July 3, 2017 file photo, an image of Qatar’s emir, Sheikh Tamim bin Hamad Al Thani, graces a billboard featuring the slogan “We are all Tamim” in Doha, Qatar. Qatar’s answer to a list of demands from four countries lined up against it may be shrouded in secrecy, but the message it delivered this week was clear enough: it is not about to roll over. AP FILE PHOTO

RIYADH, Saudi Arabia—Saudi Arabia and its allies on Friday criticized Qatar’s refusal to accept conditions to end the Gulf’s biggest diplomatic crisis in years as a threat to regional security.

Saudi Arabia, Egypt, the United Arab Emirates and Bahrain said Qatar’s rejection of a list of demands they set to lift sanctions on Doha “reflects its intention to continue its policy, aimed at destabilising security in the region,” according to a statement on the official SPA news agency.

“All political, economic and legal measures will be taken in the manner and at the time deemed appropriate to preserve the four countries’ rights, security and stability,” the statement added, without elaborating on the potential measures.

The four states last month announced the severing of all diplomatic ties with Qatar over allegations the emirate bankrolled Islamist extremists and had close ties with Saudi’s arch-rival Iran.

On June 22, they issued a 13-point list of demands, including the shutdown of broadcast giant Al-Jazeera, as a prerequisite to lift the sanctions, which include the closure of Qatar’s only land border and suspension of all flights to and from the country.

The Saudi foreign ministry on Wednesday said they had received Qatar’s rejection of their demands, raising fears of escalation in the volatile region.

Saudi and its allies now consider the demands, sent via mediator Kuwait, “null and void” as the Qatari government had “thwarted all diplomatic efforts to resolve the crisis,” according to Friday’s statement.

Credit ratings agency Moody’s has announced it was changing the emirate’s outlook to negative from stable over the crisis.