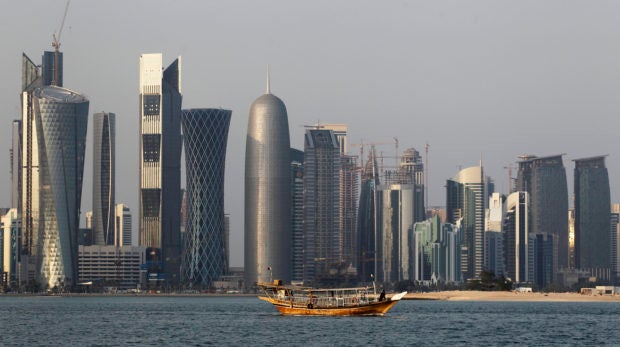 In this Thursday Jan. 6, 2011 file photo, a traditional dhow floats in the Corniche Bay of Doha, Qatar, with tall buildings of the financial district in the background. Acting as a mediator, Kuwait has presented Qatar a long-awaited list of demands from Saudi Arabia, Bahrain, the United Arab Emirates and Egypt, four Arab nations that cut ties with Qatar in early June, 2017. AP FILE PHOTO

DOHA, Qatar—Qatar confirmed it received a list of demands on Friday from countries which have cut diplomatic ties with Doha, according to a statement released on state media.

It is the Gulf nation’s first formal statement since news broke earlier Friday that Saudi Arabia, the United Arab Emirates, Bahrain and Egypt had made 13 demands in order to resume relations with Qatar.

“The state of Qatar announced its receipt of a paper, on June 22, containing demands from the seige countries and Egypt,” read a statement from the Ministry of Foreign Affairs, published in the early hours of Saturday morning local time.

“The State of Qatar is currently studying this paper, the demands contained therein and the foundations on which they were based, in order to prepare an appropriate response.”

The list, which became public knowledge on Friday, apparently includes a demand for the closure of Al-Jazeera television, a long-standing source of conflict between Doha and neighboring countries.

READ: Saudis, allies have list of demands for Qatar—US

It also calls on Qatar to cut ties to groups including the Muslim Brotherhood, the Islamic State organization, Al-Qaeda and Lebanon’s Iran-backed Hezbollah movement.

Doha is also required to hand over opposition figures wanted by its three neighbors and Egypt.