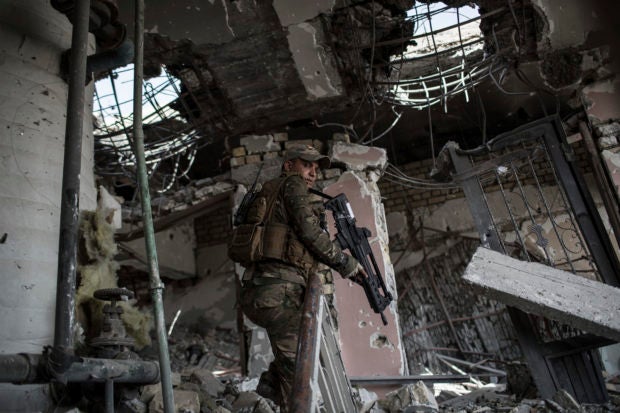 An Iraqi lawman from the Federal Police Rapid Response Force fighter walks inside a building at Mosul’s main hospital complex after it was retaken by Iraqi forces during fighting against ISIS militants, in Mosul, Iraq, Tuesday, July 4, 2017. AP

MOSUL, Iraq — Iraq’s prime minister on Tuesday congratulated his fighters on “the big victory in Mosul” — even as fighting with Islamic State of Iraq and Syria (ISIS) militants continued in Mosul’s Old City neighborhood where Iraqi forces are about 250 meters from the Tigris River and facing increasingly fierce resistance.

Haider al-Abadi spoke during a press conference in Baghdad, less than a week after he declared an end to ISIS’ self-styled caliphate after Iraqi forces achieved an incremental win by retaking the landmark al-Nuri Mosque in the Old City.

“Praise be to God, we managed to liberate (Mosul) and proved the others were wrong, the people of Mosul supported and stood with our security forces against terrorism,” al-Abadi said.

His remarks came on the third anniversary of ISIS leader Abu Bakr al-Baghdadi’s sermon at the al-Nuri Mosque, from where he declared an Islamic caliphate on ISIS-held lands in Syria and Iraq.

Also during the press conference, al-Abadi added that he has given instructions to rebuild and stabilize areas of the city already freed from the militant group.

Inside Mosul’s Old City, civilians fleeing Iraqi advance are increasingly desperate. The elderly and weak are carried across mounds of rubble in blankets. Soldiers — increasingly fearful of the Old City’s inhabitants after a string of suicide bombings — hurry the groups along.

A middle-aged woman with a gaunt, pale face fainted as she fled past the destroyed al-Nuri Mosque. Two soldiers carried her to the roadside and tried to revive her with cold water.

Largely cut off from food and water for months, humanitarian groups are reporting a spike in the number of displaced people suffering from malnutrition and dehydration.

“None of the previous battles were like this,” said Iraqi Maj. Faris Aboud, working at a small field hospital just outside the Old City.

“In a single day we received 300 wounded,” Aboud, a father of three continued. “For me, seeing the wounded children is the hardest, we see children who have lost their entire families under the rubble, they have no one now.”

Lt. Gen. Abdel Ghani al-Asadi, of Iraq’s special forces, said earlier in the day that Iraqi forces are just 250 meters (yards) from the Tigris River, in the western half of Mosul. The Tigris divides the city roughly into its western and eastern half, which was liberated from ISIS militants back in January.

ISIS militants who remain trapped in just a few hundred meters of territory in the Old City are now in a “fight to the death,” al-Asadi said, adding that ISIS fighters are increasingly resorting to suicide bombings and that he expects the fighting to get even heavier as they are pushed closer to the river.

Iraqi forces marked a significant victory this week when the Rapid Response Division retook Mosul’s main hospital complex on the city’s western side.

The building that once held the city’s best medical facilities now sits devastated by the fight. For weeks, a handful of ISIS snipers perched in the main hospital’s top floors held back hundreds of Iraqi forces.

Iraqi forces launched the operation to retake Mosul, the country’s second largest city, in October. ISIS overran Mosul in a matter of days in 2014. At the height of the extremists’ power, they held nearly a third of Iraq.

A man who asked to only be referred to as Abu Abid, for fear for his family’s safety, was waiting to get a spot on a truck after fleeing the Old City.

“That place, it was absolute death,” he said. “We will never be the same. Once the fear has been planted in your heart, you can’t get rid of it.” CBB