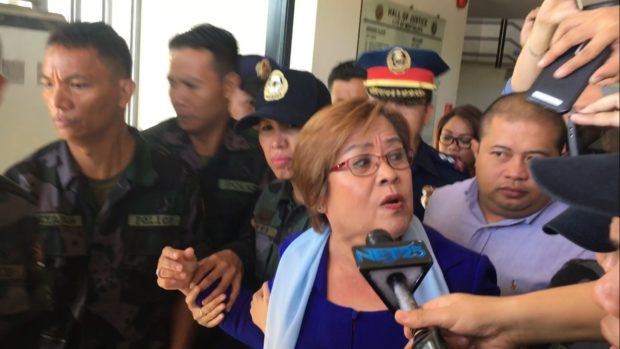 In this file photo on June 30, 2017, Senator Leila de Lima gives her sentiments to the media as she steps out of the Muntinlupa regional trial court room following the deferment of a court proceeding for her second drug trade charge.
PHOTO BY ERMA EDERA / PHILIPPINE DAILY INQUIRER

“They told the people that I am the ‘Drug Queen’ because, without me, illegal drugs would not be traded within the New Bilibid Prison, yet this administration’s secretary of justice now admits that, despite my detention and the measures they have taken, the drug problem in the BuCor remains unabated,” de Lima said in a statement.

The senator has been charged and detained at the Philippine National Police Custodial Center in Quezon City for alleged involvement on illegal drug trade when she was still the justice secretary.

“When our leaders feed us lies to hide their incompetence and real agenda, our only hope as a people of ferreting out the truth lies in asking the right questions,” she said.

The bishop earlier questioned why the war on drugs was only targeting the poor or small-time drug suspects instead of big and powerful drug cartels.

READ: Priest to ‘invisible’ killers: God knows who you are

De Lima agreed with the bishop’s observation, noting that the government’s campaign against illegal drugs had resulted in the deaths of thousands of drug suspects, but no major drug lord or drug syndicate has been exposed, investigated and prosecuted.

“On the contrary, many self-confessed ones have been given a free pass in exchange for falsely testifying against the President’s most vocal critic,” she lamented.

De Lima expressed hope that the questions raised by the bishop would inspire more religious, political and social leaders to speak up, and more of our people to start thinking for themselves.

“This is our nation that is decaying and dying because, not only is this administration lying to us about the true and bloody results of their ‘war on drugs,’ they are poisoning us with their chosen panacea for our problems: death and violence,” she said.

“Our search for the truth starts with people like Bishop David, who ask searching questions and open our eyes to the sickening Truth: that we have been duped by a false and twisted promise of change,” the senator added.  Airei Kim Guanga, INQUIRER.net trainee / JPV