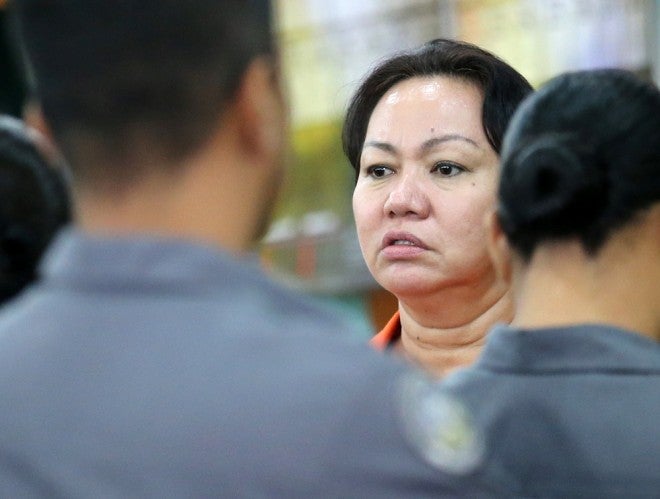 MANILA — State prosecutors have opposed the plea of alleged pork barrel scam mastermind Janet Lim-Napoles to stop the use of her 2014 sworn statements as evidence against her in the P224.5-million plunder case of former Senator Ramon “Bong” Revilla Jr.

While admitting that Napoles’s statements have been rendered inadmissible as evidence by the denial of her state witness application, the Ombudsman’s Office of the Special Prosecutor still called Napoles’ move “premature.”

In a six-page comment-opposition filed before the Sandiganbayan First Division, the OSP said it was too early for Napoles to object to the use of her affidavits dated May 12 and May 26, 2014.

The statements have not been presented in the Revilla trial, which only began last June 22. The OSP noted that objection to evidence should be made “within three days after notice,” under Rule 132, Section 36 of the Rules of Court.

“There is no legal ground to ask for the exclusion of these affidavits which have not yet been utilized but simply marked as evidence for the prosecution… during the preliminary conferences,” read the OSP
comment.

At the same time, the prosecution disagreed with Napoles that her affidavits could not be used because they were meant to be seen only by then-Justice Secretary Leila de Lima as part of her application to become state witness.

Even if Napoles’s failure prevents the use of the affidavits to prove the wide-ranging multibillion-peso scheme, the OSP said the affidavits “have not been rendered wholly inadmissible”

It said the prosecution should still be allowed to use Napoles’s own statements to discredit her by confronting her with her own words.

“While it is true that under Section 11 of [Republic Act No.] 6981, the sworn statement of an accused applying to become a state witness becomes inadmissible if his application… is denied, the same may
still be admitted for impeachment purposes,” the OSP comment read.

It may be recalled that the Aquino administration rejected her application. Yet, De Lima submitted the affidavits upon being subpoenaed by the Senate blue ribbon committee; these were then released to the media by then-committee chairman Teofisto Guingona III.

The OSP, however, said the affidavits now form part of the Senate’s public records and “consequently, the Court should allow its presentation.”

Through the May 12 affidavit, Napoles went into full detail regarding the alleged commissions given to legislators accused of diverting their Priority Development Assistance Fund proceeds to dubious foundations linked to her.

The May 26 document, meanwhile, was an extended affidavit that  implicated 20 senators, 100 congressmen, and their alleged agents. Napoles claimed there that she learned from former Batanes Rep. Florencio Abad that she needed to establish cooperatives or non-government organizations to profit off the pork barrel funds.

Napoles, however, continued to plead not guilty to the various corruption charges that have piled up before the Sandiganbayan.

She again went through her latest arraignment before the court’s Second Division on Tuesday, this time in connection with the alleged misuse of former Davao del Norte 1st District Rep. Arrel Olaño’s PDAF proceeds totaling P8.5 million in 2007.

Napoles entered not guilty pleas to three counts each of violation of Section 3(e) of the Anti-Graft and Corrupt Practices Act and malversation.

Olaño’s arraignment, however, was postponed to September 4 as he intends to appeal the anti-graft court’s June 5 resolution denying his motion to quash the cases. He only received the ruling on June 27, giving him until July 13 to file a motion for reconsideration.