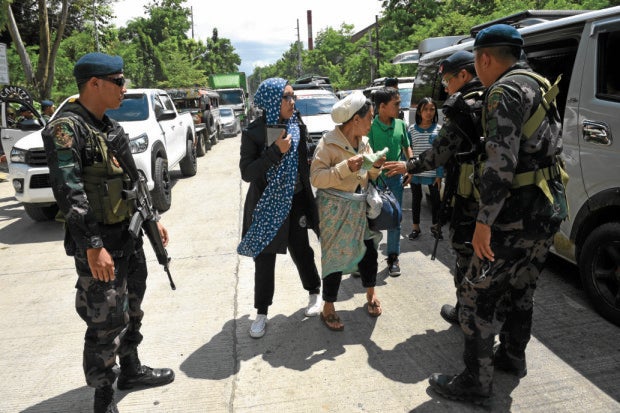 In this file photo taken on May 24, 2017, police officers check evacuees from Marawi City at a checkpoint by the entrance of Iligan City in Mindanao. AFP

MARAWI CITY–Hostages being held by the Maute group had been forced to “convert” to Islam in order to survive, the military said based on the testimonies of survivors who were either rescued by government forces or escaped captivity.

The Joint Task Force Marawi, which supervises the military operation here against the Islamic State-inspired Maute group and Abu Sayyaf bandits, said these claims were made by hostages who were either rescued or have escaped from captivity.

“All these hostages revealed that they were forced to convert to Islam or be killed,” the JTF Marawi said in a statement.

Some former hostages the Inquirer have spoken with in the early days of the siege also claimed that some of their companions—including Muslims—were executed by the extremists for failing to recite the Shahada.

Secretary Abul Khayr Alonto, the chair of the Mindanao Development Authority, earlier said the acts of the Maute group and its allies did not conform to the teachings of Islam.

“So, they are evil and not Muslims,” Alonto said.

For one, Alonto said that in real jihad, hostages should be treated fairly and not harmed and that Muslims should not compel others to embrace Islam.

The hostages, Herrera said, were also being used to forcibly enter houses and haul ammunition, firearms, cash, gold and jewelry.

“An estimated P500-million worth of cash was reportedly looted, stolen by Maute, ASG rebels together with criminals in Marawi City according to revelations by hostages who successfully escaped and were later on rescued by government forces,” he said in a statement.

Herrera said the military believes that the amount stolen by the Maute group and its allies “could be more” as the escaped or rescued hostages said they were just speaking about the activities the extremists have forced them to do.

Herrera said based on what was told them, the hostages were made to enter houses and take any valuable they could find and take them to a mosque serving as “central storage” for looted items.

“(These were being) received by designated Maute members who were keeping a list for accounting,” he added.

The exact number of hostages being made to do things against their will was uncertain.

But the JTF Marawi said based on past claims by the Maute that it held 250 individuals during the early days of the siege—including Catholic priest Teresito Suganob, women and children—and the number of released, escaped and or rescued hostages totaling 149, the safe figure could be around 100 hostages who remained in captivity to this day. JPV