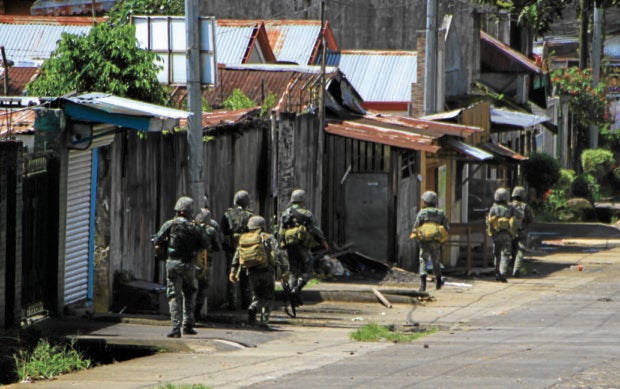 FILE – Military troops belonging to the 5th Marine Battalion of the 1st Marine brigade assault one of the strong hold of Maute terrorists group lair in the vilagae of Mapandi after an airstrike from MG-520 attack helicopter bombard the area with rockets. PHOTO/ Richel V. Umel, Inquirer Mindanao

MARAWI CITY, Philippines – Efforts to rescue up to 2,000 civilians trapped by fighting between troops and Islamist militants here failed on Sunday when a proposed truce ended in a hail of gunfire and explosions, authorities and witnesses said.

The civilians were pinned down nearly two weeks ago in the center of Marawi on Mindanao island, where gunmen loyal to the Islamic State group are holding out against a military assault.

The government said 178 people have been killed so far.

Local authorities said government officials, working through intermediaries, had reached  agreement with the militants to observe a four-hour ceasefire Sunday to let the trapped civilians leave.

But the officials failed to secure agreement from their own military for the truce, provincial crisis management committee spokesman Zia Alonto Adiong told AFP.

He said the military only allowed rescuers to access areas on the fringes of zones held by the militants, and barred them from entering bombed-out city blocks.

As a result only some 170-plus trapped residents were led to safety Sunday, according to the military.

“We felt a bit disappointed and betrayed. We’re talking about lives of people, my God!” Adiong said.

Gunfire and explosions, including from several artillery shells, later forced the rescuers to retreat, AFP journalists saw. There were contradictory reports on who was firing.

“The military… did not approve entry into high-risk areas to avoid putting our humanitarians in danger and any possibility that may complicate the situation,” President Rodrigo Duterte’s spokesman Ernesto Abella said in a statement.

The chief delegate for the International Committee of the Red Cross in the southern Philippines told AFP those rescued Sunday were mostly men and appeared to be in relatively good health.

By contrast, 14 of the nearly 200 rescued on Saturday had to be hospitalized, Roberto Petronio said.

“These were mostly children who were suffering from diarrhea and malnutrition,” he added.

The military has bombarded Marawi with air strikes and waged fierce street-to-street battles with hundreds of gunmen since they began a rampage through residential areas waving the black flags of the IS.

A total of 120 gunmen including eight foreign fighters, 38 soldiers and police and 20 civilians have been killed, officials said, giving lower figures than previously for civilian deaths.

Scores of people made a daring dash for safety on Saturday, including one of Marawi’s most respected politicians who had hidden 71 Christians in his home and led 144 people through downtown streets strewn with rotting corpses.

But small hardline groups, including the Maute and Abu Sayyaf, which are involved in the Marawi battle, have refused to negotiate and sought to unite behind IS.

Indonesia’s Defense Minister Ryamizard Ryacudu said on Sunday there are about 1,200 IS operatives in the Philippines.

He was speaking at a security forum in Singapore. Philippine Defense Undersecretary Ricardo David, speaking at the same event, put the figure at about 250-400.

The clashes in Marawi erupted when security forces raided a house to arrest Isnilon Hapilon, a veteran Filipino militant regarded as IS’s leader in the Philippines. He is on the US government’s list of most-wanted terrorists.

Authorities said they were taken by surprise when many gunmen emerged to protect Hapilon and then went on a rampage through Marawi, which has a population of 200,000.

Shortly after the violence erupted Duterte imposed martial law in Mindanao, home to 20 million people, to quell what he said was an IS bid to establish a base in the mainly Catholic Philippines.