Duterte: For every addict slain, an innocent dies, too 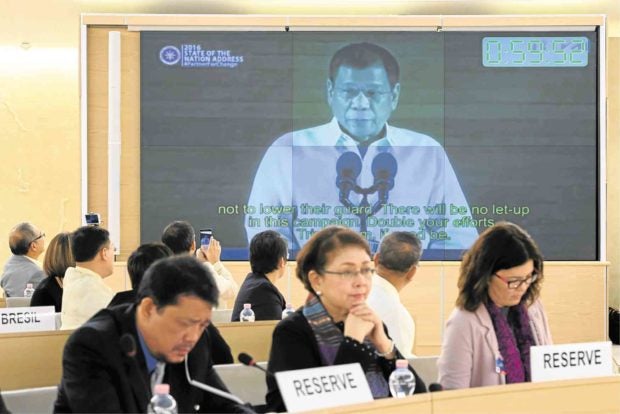 A video of President Duterte’s first State of the Nation Address plays in the background as delegates in the UN High Commissioner for Human Rights conduct a review of the Philippines’ human rights record in May. —AFP

President Rodrigo Duterte again slammed human rights advocates for defending criminals, but the Commission on Human Rights (CHR) reiterated its mandate as “the conscience of the government.”

“Most of the time, these human rights [lawyers] defend criminals. They don’t have clients who are not criminals,” Mr. Duterte said.

He said they did not even express sympathy for the victims or condemnation of the crime, citing the killing of the Carlos family in San Jose del Monte City in Bulacan on Tuesday.

“Every day there is an addict killed, there is also an innocent person who is held up [or] killed,” the President said. “And these idiots just [turn] a blind eye. The jerks don’t care.”

The President made the remarks as the CHR released an infographic on social media restating its constitutional mandate to protect the rights of citizens against possible abuse by the state.

“Each branch of government has a duty to observe and fulfill the rights and the needs of the citizenry. But if it is the state or the government itself that violates or denies human rights, that is when the CHR will act as the conscience of the government,” the CHR said.

“If it is a civilian or private person who did the crime, such as killing or rape, it is the Philippine National Police [that has] the duty and mandate to take action,” the CHR said.

The agency had earlier lamented the longstanding public misconceptions about its mandate, especially under the Duterte administration which has “demonized” human rights advocates.

“Every time we talk to the media about this or that killing, we are immediately accused of being protectors of criminals,” CHR Commissioner Roberto Eugenio Cadiz said in a recent interview.

“One senator even sent us a pile of cases challenging us to investigate carnappings, kidnappings. And he’s already a senator. They don’t understand that the CHR is not the police,” Cadiz said.

Cadiz explained that under traditional definitions, human rights violations are committed by the state.

“There’s another school of thought that violations can be committed even by nonstate actors, but … most cases we are investigating involve alleged violations of the state,” he said.

“We are not against the government peace and order program, not against going after drug syndicates. We are against shortcuts in processes, such as when innocent people merely accused are killed by the wayside,” Cadiz added.

“We put pressure not for the purpose of harassing or embarrassing our government, but for making them accountable so human rights violations don’t continue,” he said.

Cadiz also refuted the police’s usual argument of self-defense when drug suspects are killed in their operations.

Man accused of killing missing wife is in critical condition