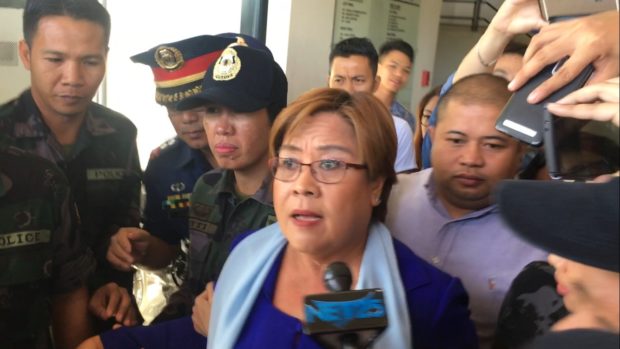 Senator Leila de Lima is being escorted as she walks out of the Muntinlupa City regional trial court room following a court proceeding regarding her second drug trade case on Friday, June 30, 2017. PHOTO BY ERMA EDERA/ PHILIPPINE DAILY INQUIRER

Detained Sen. Leila de Lima did not lose her bite even after a Muntinlupa City court on Friday issued anew a warrant of arrest against her alleged involvement in the illegal drugs trade in the national penitentiary.

Clad in a royal blue long sleeve dress and her signature light blue scarf, De Lima attacked the first year in office of President Rodrigo Duterte, her archnemesis even when the latter was the Davao mayor.

On Friday, when the senator was supposed to enter a plea—whether guilty or not guilty—on one of the three illegal drug trade charges, Muntinlupa Regional Trial Court Branch 205 Judge Amelia Fabros-Cruz deferred her arraignment pending the motion for reconsideration of her camp.

Atty. Alex Padilla, one of De Lima’s lawyers, said they have an existing motion for reconsideration with motion to recall the warrant of arrest, and motion to defer arraignment. The next hearing was set on Aug. 18.

Fabros-Cruz was also the judge which issued the second warrant of arrest against De Lima on June 21 for Criminal Case No. 17-166.

Another drug case is being heard at Branch 206 headed by Judge Patria Manalastas-De Leon.

Before she boarded the shuttle returning her to detention cell in Camp Crame, De Lima decried the charges against her: “Mga kasinungalingan, fake cases, lalo na itong mga paratang sa akin (All lies, fake cases, especially all these accusations against me).”

The lady senator was greeted by her supporters who staged a protest outside the Muntinlupa City Hall of Justice with a “five” hand signal, signifying her surname “De Lima.”

The protesters chanted repeatedly “Free De Lima now” and “Laban, Leila” beside a fountain bearing the statue of Lady Justice, blindfolded and carrying a sword in her left and a weighing scale on her right.

Senior Supt. Dante Novicio, the Muntinlupa police chief, said the around 30 individuals, coming from Alitaptap and Free Leila Movement groups, did not have a permit to hold a rally.

Police, however, did not disperse the protesters but told them to stop the programs when the hearing started around 9 a.m.

One of the supporters of De Lima told the Inquirer: “Hindi kami naniniwala sa ipinataw na kaso ni Pangulong Duterte at ng kanyang administrasyon. Lahat po ng ito ay peke (We don’t believe in the charges filed by President Duterte and his administration. All of these are fake).” With a report from Erma Edera/JPV/rga