Obama making nostalgic visit to city of his childhood 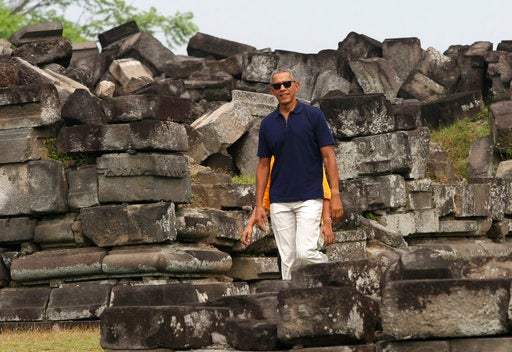 Former U.S. President Barack Obama walks during his visit to Prambanan Temple in Yogyakarta, Indonesia, Thursday, June 29, 2017. Obama and his family are currently on vacation in the country where he lived for several years as a child. AP

BOGOR, Indonesia—Former President Barack Obama and his family are set to visit his childhood home city of Jakarta at the end of their 10-day vacation to Indonesia, where they went whitewater rafting and visited an ancient Buddhist temple.

Indonesian President Joko “Jokowi” Widodo will host Obama on Friday at the Bogor Palace in West Java, a grand Dutch colonial building famous for its 200-acre botanical gardens and the herd of spotted deer that roam the grounds.

Obama was incredibly popular in Indonesia during his presidency, and many here saw him as a symbol of hope and religious tolerance because of his years living in the Muslim country. A statue of the kid still remembered as “Barry” by childhood friends was erected outside the elementary school he attended in Jakarta./rga