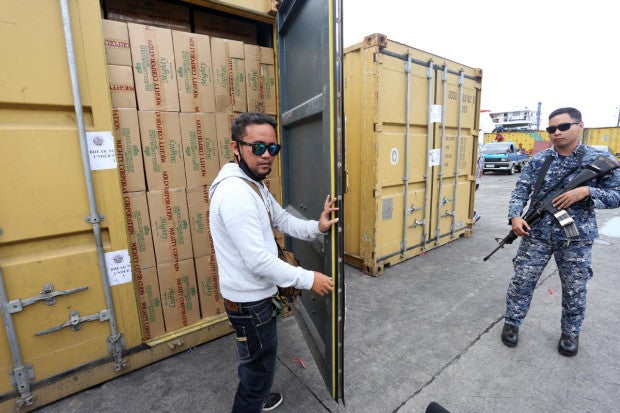 A coast guard personnel (right) stand guard to the sized by the Bureau of Customs the alleged smuggled Mighty cigarettes in two 20 footer container vans at pier 4. (JUNJIE MENDOZA)

Assistant State Prosecutor Ma. Lourdes Uy, a member of the prosecution panel handling the cases against the company, said the respondents in the case are expected to submit their counter-affidavits.

The P1.39 billion tax evasion complaint is the third one filed before the DOJ by the BIR against the respondents.

The first two complaints have yet to be resolved by the panel of prosecutors.

Under the three complaints, the respondents are accused of Unlawful Possession of Articles Subject to excise Tax without Payment of the Tax, and for Possessing False, Counterfeit, Restored or Altered Stamps, in violation of Section 263 and 265(c) of the National Revenue Code of 1997, as amended (Tax Code).

The other two complaints are based on other fake tax stamps found on its cigarette products stored in warehouses in in Barangay Matimbubong, San Ildefonso, Bulacan and the Sunshine Corn Mill warehouse in General Santos City, respectively. JE/rga