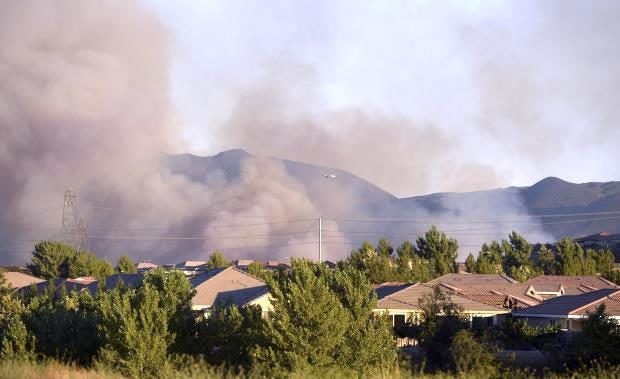 In this photo, taken Monday, June 26, 2017, smoke plumes from the Manzanita Fire are seen near Beaumont, California. A wildfire in a rugged inland area of Southern California grew substantially overnight. The blaze burning in Riverside County about 128.75 kilometers east of Los Angeles is only 10 percent contained Tuesday morning, June 27. Several small communities have been warned to be ready to evacuate. (Photo by MICAH ESCAMILLA / The Press-Enterprise via AP)

PHOENIX — A wildfire burning Wednesday through a dense Arizona forest has forced hundreds of people from their homes, closed a major road and created a huge plume of smoke over the same area devastated by a blaze that killed 19 firefighters four years ago.

The fire near the small city of Prescott, fanned by 56 kph (35 mph) winds, has charred more than 73 square kilometers (28 square miles). More than 500 firefighters were battling the blaze.

Elsewhere across the western US, Utah firefighters braced Wednesday for more high winds as they try to slow a stubborn wildfire that has burned 13 homes and forced the evacuation of 1,500 people from a ski resort town.

And in California, a wildfire destroyed the home of “Big Bang Theory” star Johnny Galecki on a ranch in the San Luis Obsipo area, said Nicole Perna, a spokeswoman for the 42-year-old actor.

The Arizona fire forced the evacuation of the town of Mayer along with several other mountain communities in the area, and one of the main roads into Prescott was closed. Mayer has about 1,400 residents.

Many residents have painful memories of a 2013 wildfire that killed 19 members of a Prescott-based hotshot crew almost four years to the date.

The current blaze is burning in chaparral that has not had a fire in more than 40 years, helping fuel its growth. It’s also in steep, rugged terrain that makes it difficult for firefighters to reach.

“Firefighters are being directed to not put themselves in situations where the risks are high and probability of success is low,” the Prescott National Forest said in a statement.

In Utah, firefighters hope Wednesday to douse areas with intense blazes at the Utah fire’s southern end so residents can return to homes in the town of Brian Head. Homes there have been evacuated since June 17 since authorities said the fire was started by someone using a torch tool to burn weeds on private land.

The Utah fire is the largest in the nation at 201 square kilometers (78 square miles).