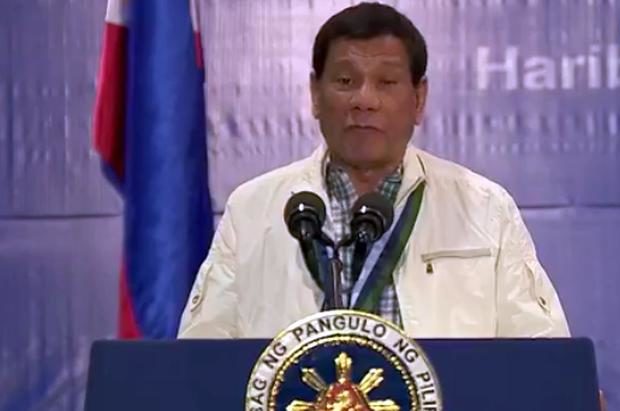 President Rodrigo Duterte delivers a speech on Wednesday, June 28, 2017, at the turnover of military arms from China at Clark Air Base in Mabalacat, Pampanga. (Photo from an RTVM video)

President Rodrigo Duterte on Wednesday said he would fire another government official over corruption allegations.

“I am about to fire somebody from here. If it is proven that… Kung humingi siya ng pera, may opisyal dito na tatanggalin ko. In a few days, I’ll fire him,” Duterte said in a speech at Clark Air Base in Mabalacat, Pampanga during the turnover of military arms from China.

“Sinabi ko sa inyo: You avoid graft and corruption because that is the very thing that has pulled us down all throughout the years,” he added.

Duterte did not give details about the official.

“Kaya hindi tayo umaasenso, kasi puro magnanakaw ang nandiyan sa gobyerno halos,” he said. “Lalo na diyan sa baba, kayong mga director, I will not hesitate to fire you, even if you have been there for the last 25 years.”

He said he would have zero tolerance for corruption.