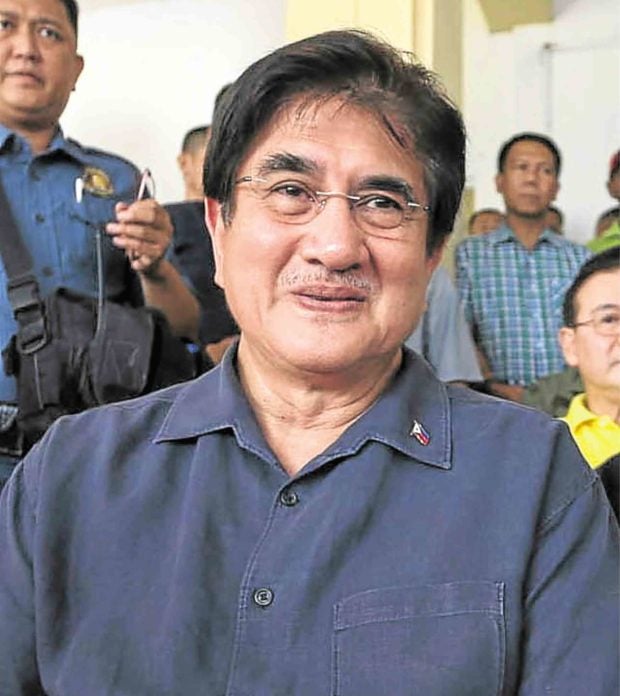 Sen. Gregorio “Gringo” Honasan II surrendered on Friday to the Biñan, Laguna, police and posted bail at a local court a day after the Sandiganbayan issued a warrant for his arrest for graft in connection with his alleged misuse of pork barrel funds.

Calabarzon police director Chief Supt. Mao Aplasca said Honasan, accompanied by his lawyer Dennis Manalo, gave himself up to the Biñan police at 7:30 a.m. on Friday.

Aplasca said Honasan underwent the booking process, including fingerprinting and mug shots, at the police station.

The senator then proceeded to the Biñan Regional Trial Court Branch 25 to post a total of P60,000 bail for two counts of graft.

Honasan is the fourth senator charged in court in connection with the misuse of the priority development assistance fund (PDAF) for lawmakers.

Since graft is a bailable offense, Honasan avoided detention unlike Senators Bong Revilla, Jinggoy Estrada and Juan Ponce Enrile, who were arrested in 2014 for plunder, which is nonbailable. Enrile was later placed under house arrest for humanitarian reasons.

“I am completely innocent of the charges against me,” Honasan said in a statement on Thursday. “All my life I have fought everything I [have been] accused of, and I will continue to do so.”

The cases arose from alleged irregularities in Honasan’s endorsement of Focus on Development Goals Foundation Inc. as the partner nongovernment organization (NGO) for the livelihood projects worth P29.1 million from his PDAF in 2012.

Honasan selected the NGO allegedly without the required public bidding in violation of various procurement rules.

The projects were meant to benefit Muslim communities in the National Capital Region and Zambales province.