UPLB students to get refund for first semester of 2017 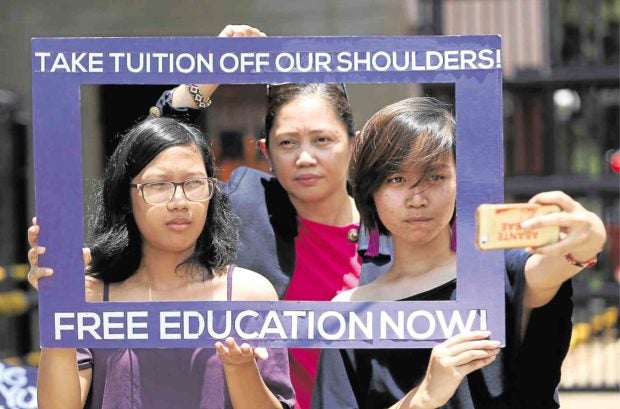 Students hold a rally outside the House of Representatives to press legislators to allocate a budget for the Free Tuition Law.—LYN RILLON

SAN PEDRO CITY—Students of the University of the Philippines Los Baños (UPLB), who had paid their tuition and other school fees this semester, would get a refund, an official of the state university campus said.

The refund loomed after University of the Philippines president Danilo Concepcion issued a memorandum on Aug. 7 stating that no fee collections should be made from Filipino undergraduate students.

President Duterte on Aug. 3 signed into law Republic Act No. 10931, or the Universal Access to Quality Tertiary Education, but admitted that he knew there were no funds to implement the law yet when he signed it.

Dr. Portia Lapitan, UPLB vice chancellor for academic affairs, said in a phone interview that while the new law has yet to take effect until next year, Concepcion “was so generous to include the first semester of this year” in the application of free tuition.

UPLB, like UP Diliman, had suspended tuition collection but lifted it days later until the law was passed.

Classes at UPLB started Aug. 2 and some students had already paid tuition.

Lapitan said the new law applies to undergraduate students. Free tuition also applies to any additional year that students may require to finish their courses.

“So if you are taking a four-year program (but fail to complete it on time), you’re still covered (by free tuition) until your fifth year,” said Lapitan.

The guidelines, however, are not yet clear if there would be academic or grade requirements to continue enjoying subsidy in state universities.