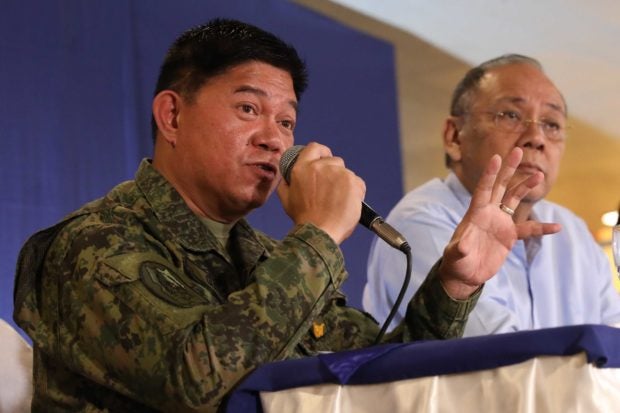 Brig. Gen. Gilbert Gapay, deputy commander of the Eastern Mindanao Command, said the BIFF had been pushed back to their stronghold in the marshlands of Maguindanao and could not mount an attack similar in scale to the siege of Marawi City by Islamic State (IS)-linked fighters.

At least six rebels and two civilians were killed and over a thousand villagers fled as BIFF gunmen descended on the villages of Malagakit and Simsiman in Pigcawayan, North Cotabato, on Wednesday. They briefly occupied a school and held residents as human shields, according to the military.

The gunmen had scrawled a threat to kill the President on a blackboard in one of the classrooms in Malagakit before fleeing from government troops. They also threatened to attack Davao City.

Gapay, who is also martial law spokesperson in Mindanao, said the threats were a “desperate pronouncement.”

The Pigcawayan attacks were “a retaliation and somehow a diversionary attack resulting from the setbacks” in their stronghold in Maguindanao, specifically the “SPMS box,” said Gapay, referring to the adjacent Maguindanao towns of Shariff Aguak, Pagatin, Mamasapano and Shariff Saydona.

Presidential spokesperson Ernesto Abella said BIFF had no “ground support” from the local Muslim population and therefore had no capability to launch attacks outside its bases.

BIFF had pledged allegiance to IS and had also forged a tactical alliance with local terrorists, particularly the Maute group, which is involved in the Marawi siege.

Cardinal Orlando Quevedo, the archbishop of Cotabato, condemned the desecration of the San Jose chapel in Malagakit by BIFF.

“As the leader of the Archdiocese of Cotabato, I condemn in the strongest terms possible the wicked desecration of the Catholic Chapel of Malagakit in the parish of Pigcawayan and most especially of the Sacred Hosts that were kept there for the Catholic faithful,” he said.  —WITH REPORTS FROM FRINSTON LIM, EDWIN O. FERNANDEZ, WILLIAMOR MAGBANUA, LEILA B. SALAVERRIA AND JULIE M. AURELIO