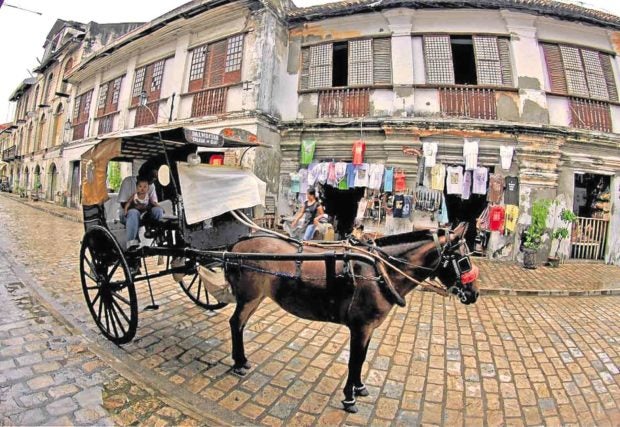 OLD COUNTRY A visit to Vigan City gives visitors a peek into how Filipinos lived during the Spanish period through mansions and historic buildings on Calle Crisologo, the center of the heritage district, and in other areas around the Ilocos Sur provincial capital. —EV ESPIRITU

CLARK FREEPORT—The historic city of Vigan in Ilocos Sur province, the rice terraces in the Cordillera region and Puerto Princesa Subterranean River National Park in Palawan province, are suffering the effects of climate change and human activities, and require better protection, according to a top heritage official.

Zerrudo, also the Philippine representative to the World Heritage Committee and director of the University of Santo Tomas’ Graduate School Center for Conservation of Cultural Property and the Environment in the Tropics, spoke during a Pampanga tourism forum here.

In Vigan, he said, the city government, which has been tasked as Unesco site manager, has put up concrete breakers along the coast to protect the 16th-century Spanish colonial town from flooding due to rising sea levels.

Thousands of tourists come year-round especially to Crisologo Street, causing shortage of parking areas and rooms while increasing the volume of trash.

As more Vigan lands are bought for resorts and inns, the sources of soil used for making local bricks and tiles have diminished, Zerrudo said.

Craftsmen have adapted by mixing inorganic waste in those products. “Authenticity requires costs and energy. We have to be meaningful in the present,” Zerrudo said.

In the centuries-old rice terraces in Ifugao province, landslides have occurred but some terraces are repaired by farmers using native stone-walling techniques, he said.

Several terraces, however, are idle because young farmers opt to do other jobs instead of cultivating rice farms.

Commercial shops, subdivisions and extreme sports destinations have risen in four Ifugao towns that are gateways to the rice terraces.

In 2016, the Ifugao provincial government, designated Unesco site manager, stopped the construction of a parking building in Banaue town due to complaints that it would block the view of the rice terraces, Zerrudo said.

He said the UN Food and Agriculture Organization had  declared the rice terraces as a Globally Important Agricultural Heritage System.

At Puerto Princesa Subterranean River National Park, Zerrudo said the local monkey population had displayed stress over changes in temperature and the presence of as many as 1,500 tourists. Crocodiles there have been moving to wetter ponds.

The park, which features a limestone karst landscape with an underground river, “is a very vulnerable site,” Zerrudo said.

For tourists visiting these heritage sites, Zerrudo said their “posture should be conservation.”

“Some ethical protocols need to be drafted,” he said.

The Department of Environment and Natural Resources, for instance, has been training its forest rangers on how best to protect the natural environment of World Heritage sites.

The three sites have yet to make it to the List of World Heritage in Danger.

According to Unesco, the danger list is “designed to inform the international community of conditions that threaten the very characteristics for which a property was inscribed on the World Heritage List, and to encourage corrective action.”