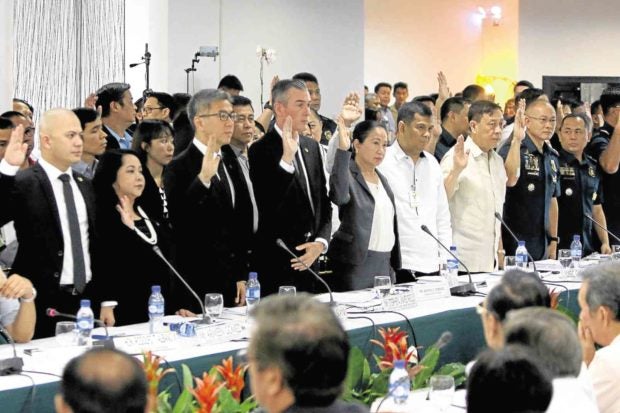 Executives of the Resorts World Manila, along with ranking police and Pagcor officials, face a joint inquiry called by three House committees on Wednesday regarding the June 2 attack on the Pasay City casino. (PHOTO BY RICHARD A. REYES / INQUIRER)

MANILA — Three weeks after a gunman set fire to its casino in an attack that cost 37 lives, Resorts World Manila has told authorities that it is ready to resume its operations.

Philippine Amusement and Gaming Corp. (Pagcor) Chairman Andrea Domingo told lawmakers that RWM president Kingson Sian has sought the lifting of the suspension of its license.

But before taking action, Pagcor would issue first a checklist “for a secure and safe environment” that RWM would have to comply with, Domingo said during the last stretch of the House of Representatives’ inquiry into the June 2 arson and attempted robbery by bankrupt gambler Jessie Carlos.

RWM also informed Pagcor that it would no longer use the second floor of its Pasay City establishment, where most of the patrons and employees died of smoke inhalation, for casino operations.

The probe had zeroed in on proposals to restrict access to casinos and improve security coordination after debt-ridden gambling addict Carlos, a former Department of Finance employee faced with various
lawsuits, apparently opened fire to scare away patrons and torched the gaming tables.

Domingo, however, cautioned against the “negative effect” of imposing a P3,000 entrance fee, saying it would “wipe out the whole mass market.”

Isabela 1st Dist. Rep. Rodolfo Albano III, who pitched the casino entrance fee, inadvertently let it slip that he has gambled in casinos too despite being an elected government official.

Domingo said Pagcor has been charging a P100 entrance fee for its licensed casinos, but Albano was incredulous. “I was never charged P100 when I go to the casino. Is that a thing?” he said.

“The people know the ones they vote for sometimes gamble too. What’s not allowed are the [unelected] civil servants,” he said, adding that “we were not addicted anyway.”

However, Section 14 (4) of Presidential Decree No. 1869, or the Pagcor charter, includes “government officials connected directly with the operation of the Government or any of its agencies” among those not allowed to play in casinos.

House games and amusements committee chairman Rep. Gus Tambunting declined to comment when later asked by reporters about Albano’s interpretation of the law, only saying that “personally, I do not gamble.”

The legislative inquiry was terminated on Wednesday afternoon after three hearings. Tambunting told reporters that the committee report may be done “early next week at most.”

In his closing remarks, Tambunting raised the following observations about the inquiry’s findings:

*  The assailant was able to gain access into the casino with minimum effort and without any challenge from the RWM security personnel, which “speaks a lot about the quality of security preparedness.”

*  There was lack of clear protocols for coordination between RWM and the authorities, as well as among the first responders such as the Philippine National Police and the Bureau of Fire Protection. Tambunting said this was “one of the proximate causes” of the suffocation of the victims.

*  Questions of jurisdiction have complicated the enforcement of laws.

“What if this was an actual terrorist attack which was well planned and aimed at exacting maximum casualties and damage? Obviously, things could have been much worse,” Tambunting said.  SFM