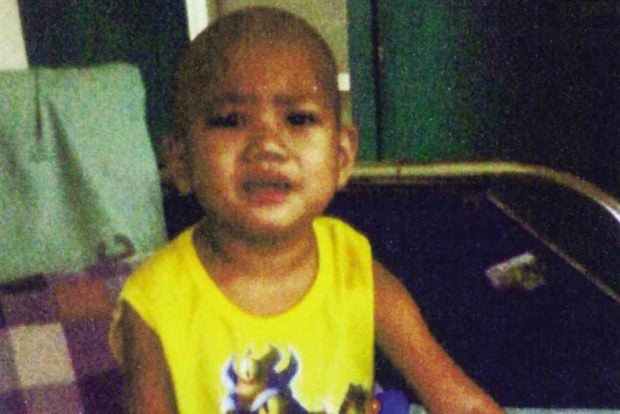 After being diagnosed with leukemia in 2015, Kian Rey Balicat successfully underwent treatment in 2016.

Reymond, who has four other children, has stopped working so that he and his wife, Cherie Mae, can accompany their 3-year-old son whenever he seeks treatment at the Philippine Children’s Medical Center in Quezon City.

“We stay at Child House in Paco, Manila. We leave our four other children with my mother,” Reymond said.

According to him, Kian is supposed to be on his sixth cycle but so far, the boy has undergone just one session due to financial constraints and frequent drops in his hemoglobin and platelet levels.

Reymond asked readers for help, saying that at P10,300 per cycle, Kian will need P113,300 for 11 sessions of chemotherapy. He is scheduled for his second one on June 27.

“We will be forever grateful to those who will help us. May God bless them always,” he said.

Read Next
DID YOU KNOW: Rizal’s 156th birth anniversary
EDITORS' PICK
Corruption in PH: Where presidential aspirants stand
Gov’t fine-tunes alert level system
Holidays made best with Acer’s ‘Holidays at Home’ raffle promo
A grand way to celebrate the holidays
Smart offers wireless fiber-like speeds to Filipino homes with country’s first 5G Prepaid Home WiFi
DOH checking if 3 COVID cases due to Omicron
MOST READ
Bong Go left PDP-Laban with presidential bid under PDDS — Pimentel
FDA warns against use of 5 imported beauty creams
Isko’s messaging takes a turn as he commends Duterte
Orthodox priest shouts ‘Pope, you are a heretic’ at Francis in Athens
Don't miss out on the latest news and information.