100 bodies may still be in besieged Marawi, says official 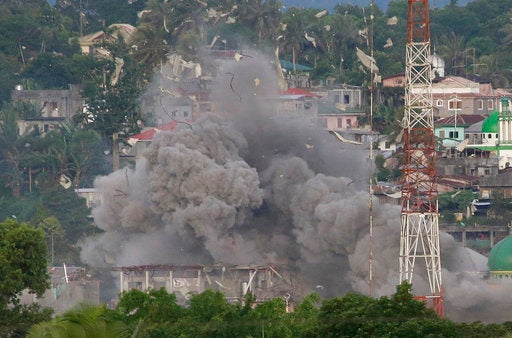 In this Friday, June 9, 2017, file photo, a cloud of debris rises as Philippine Air Force fighter jets bomb suspected locations of Muslim militants as fighting continues in Marawi city, southern Philippines. It’s unclear how many people remain trapped in Marawi as government troops battle Muslim militants led by the so-called “Maute” group but army officers have put the figure this week at anywhere from 150 to 1,000. AP FILE PHOTO

MARAWI—About 100 bodies of civilians and Islamic militants remain uncollected in the rubble of Marawi because of continuing fighting between troops and gunmen aligned with the Islamic State group, an official said Thursday.

Provincial government crisis committee spokesman Zia Alonto Adiong said the estimate was based on accounts by residents who have escaped from areas of Marawi City that are still mired in clashes, and aid volunteers who entered a combat zone during a four-day lull in the fighting last week.

Retrieval teams have been organized although it remains unclear when the siege by the remaining militants, estimated to number more than 100, can be quelled by troops, Adiong said. The stench of death has been reported by witnesses in still-inaccessible areas since militants launched their attack on May 23.

“We need to expect the worst and to be ready to transition from a crisis mode to a recovery mode,” Adiong told The Associated Press by telephone.

The violence in the lakeside city has left 202 gunmen, 58 soldiers and policemen and 26 civilians dead, officials say. The most serious attack in Southeast Asia so far by IS-aligned militants has displaced most of the more than 200,000 residents of Marawi, the bastion of Islamic faith in the south of the predominantly Roman Catholic nation.

Many of the militants reportedly killed in the clashes have not been recovered.

While the remaining gunmen have been isolated in four areas, sporadic gunfire has been reported in other places.

An Australian journalist was hit by a bullet in his neck on Thursday while covering the Marawi crisis. ABC journalist Adam Harvey, who was wearing a neck brace, told reporters he was fine as he walked out of a hospital.

Harvey, ABC’s Jakarta-based Southeast Asia correspondent, was hit at a provincial government compound in Marawi while interviewing children from families displaced by the fighting. The sprawling compound near an army brigade has served as a venue for daily news conferences by government and military officials and is regarded as a relatively safe area.

“Thanks everyone – I’m okay. Bullet is still in my neck, but it missed everything important,” Harvey tweeted.

Also Thursday, a suspected militant bomber was arrested in Cagayan de Oro City, about 100 kilometers (62 miles) from Marawi, according to police.

More than 1,600 residents have been rescued from areas of heavy fighting in Marawi, many of them still shell-shocked and hungry and some wounded. Tales of love and heroism have emerged, including a group of trapped Muslim policemen who helped several Christian workers escape with them from the intense fighting.

READ: In war-torn Marawi, tales of daring escape amid violence

Villager Saipoding Mariga waited in tears for days to be allowed to rescue his wife, Geraldine, who was trapped in a heavily bombarded neighborhood, but was not allowed by troops because of the grave danger. Facing TV cameras, he pleaded to be allowed to enter the conflict zone to save his wife.

Mariga eventually met his wife in a tearful reunion at Marawi’s newly reopened Amai Pakpak hospital, where she was brought with a gunshot wound in her leg and shrapnel injuries on her body, the ABS-CBN TV network reported Thursday.

“What’s important is you recognize me and we saw each other again,” Mariga told his wounded wife at the hospital’s emergency ward./rga