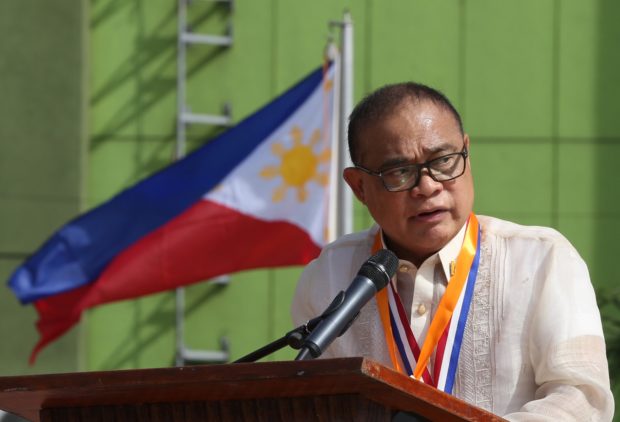 At the resumption of oral arguments on Mr. Duterte’s Proclamation No. 216, justices of the Supreme Court expressed concern over the effects of the martial law proclamation and the suspension of the privilege of the writ of habeas corpus in Mindanao on the civil liberties and other constitutional rights of Filipinos.

The magistrates also grilled Solicitor General Jose Calida on the sufficiency of the factual basis of the President’s order, which the petitioners claimed violated Section 18, Article VII of the 1987 Constitution.

During the seven-hour arguments in open court, Del Castillo asked Calida why the military failed to stop the Islamic State (IS)-inspired Maute terror group from seizing Marawi City on May 23.

At some point, Calida seemed to run out of legal arguments to defend the President’s decision as he admitted that there was “not much differen[ce]” between Mr. Duterte’s authority to deploy military troops and the declaration of martial law.

Citing the information provided by the military, Del Castillo noted that the terrorists had an elaborate plan to attack Marawi and even had a huge stash of money, which was found by government forces in a house used by the terrorists as a sniper’s nest.

What is more troubling is the possibility that Mr. Duterte, who said that his martial law order “would not be different” from what the late dictator Ferdinand Marcos issued in 1972, may put the whole country under martial law, Del Castillo said.

“It might embolden the President to later on declare martial law in Metro Manila, Luzon, the Visayas and the entire Philippines,” Del Castillo told Calida.

But Calida said Mr. Duterte’s decision was intended to prevent the Maute group and its terrorist allies from launching similar attacks in other areas in Mindanao.

“He has to act swiftly and decisively. It was the President’s judgment that martial law was necessary to quell the rebellion, which indeed existed,” Calida said.

He also told the magistrates that Mr. Duterte’s decision should enjoy the “constitutional presumption of regularity” and that it was based on intelligence information that was available only to the most powerful man in the country.

Del Castillo concurred with the observation of Senior Associate Justice Antonio Carpio and Associate Justice Marvic Leonen that most parts of the Mindanao region were not facing the threat of terror attacks from Maute and other Moro extremists.

“It’s a total failure of intelligence,” Del Castillo said. “Why did it have to reach this point when practically the military was taken by surprise?”

Calida said intelligence gathering was similar to a jigsaw puzzle and that putting together classified information was “not perfect.”

“There are parts of the puzzle that are not yet clear. What is clear is that Isnilon Hapilon was already in Marawi City. That’s why the military went there to arrest him,” he said, referring to the leader of the Abu Sayyaf faction who had pledged allegiance to IS.

The justices raised questions about Calida’s assertion that there was an ongoing rebellion in other provinces in Mindanao.

At one point, Del Castillo referred to the situation as a “brewing rebellion.”

Albay Rep. Edcel Lagman, who filed one of the petitions challenging the constitutionality of Proclamation No. 216, said the concept of “imminent danger” was not a justification for imposing martial law as stated in the Constitution.

Chief Justice Maria Lourdes Sereno said soldiers and policemen tasked to enforce the President’s martial law order may face criminal and civil suits for implementing “a possibly misdirected order” if the 15-member tribunal votes to strike it down as unconstitutional.

In her interpellation of lawyer Marlon Manuel, the counsel for a group of women from Marawi, Sereno said it was wrong to “presume that martial law per se is good for the AFP (Armed Forces of the Philippines).”

“Do you think it’s also our duty to remember the brave men and women of the AFP who, under a possibly misdirected order, can actually do acts for which they will eventually be criminally and civilly liable?” Sereno asked Manuel, who answered in the affirmative.

Calida said the May 23 terror attack in Marawi was “not an isolated incident,” as it was part of the Maute group’s plan to establish a “caliphate” in the country.