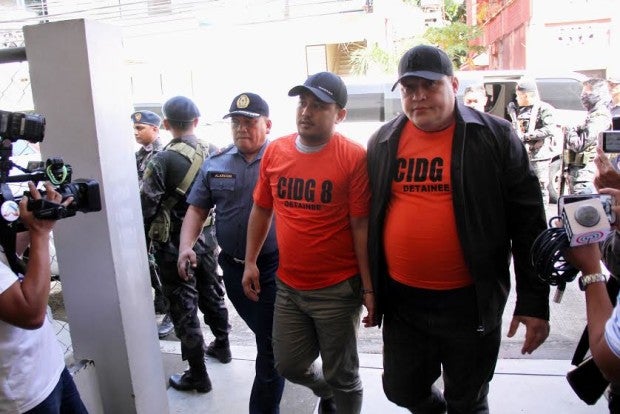 Supt. Marvin Marcos (right) and one of his coaccused in the murder of Albuera, Leyte Mayor Rolando Espinosa Sr. arrive at the court that issued arrest warrants for them.  (FILE PHOTO BY ROBERT DEJON/ INQUIRER VISAYAS)

BAYBAY, Leyte — The camp of slain Albuera, Leyte mayor Rolando Espinosa Sr. has asked the court not to admit the resolution of the Department of Justice to downgrade the murder case against 19 police officers to homicide.

Lawyer Leilani Villarino told Judge Carlos Arguelles at Regional Trial Court Branch 14 that they had 10 working days to file a motion and ask the DOJ to reconsider its decision.

Judge Arguelles asked both the prosecution and the defense to send their comments on Wednesday on the DOJ decision that downgraded the murder case against 19 members of the Criminal Investigation and Detection Group in Eastern Visayas (CIDG-8) for the killing of Espinosa and another inmate Raul Yap inside their detention cells at the sub-provincial jail in Baybay City on Nov. 5, 2016.

Unlike in previous court proceeding where the 19 came in handcuffs and in orange detainee uniforms, the police officers were in casual clothes with no handcuffs when they appeared in court on Wednesday morning.

Mariel Espinosa, the mayor’s daughter shouted “CIDG criminal” when the officers passed at them while walking back to their vehicles that would bring them back to Tacloban City.

In downgrading the case to homicide, the DOJ cited in its May 28 resolution the absence of premeditation.

The DOJ resolution said that what the CIDG men did in implementing a search warrant in the jail facility was not excessive but “necessary force.”

The gunpowder burns on Yap and Espinosa only showed that they had shot it out with the police during the raid.

“So it would depend on what happens next.  If my motion is granted, hopefully then the arraignment will be suspended.”

Villarino said they were shocked by the DOJ resolution but they lost no time in filing a motion for reconsideration, which has been submitted for resolution.  SFM