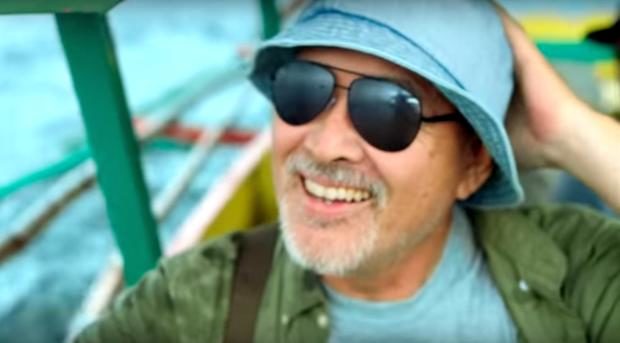 M. Uchimua in the “Sights” TV ad that was produced by McCann Worldgroup Philippines for the Department of Tourism (Photo taken from the video)

The Department of Tourism (DOT) and one of the world’s top advertising agencies on Tuesday defended the government’s latest video advertisement to promote the Philippines after it was criticized as a copy of South Africa’s tourism campaign.

“There has never been any intention to copy anyone’s creative work,” said McCann Worldgroup Philippines, which took responsibility for the 60-second ad.

“We acknowledge the feedback that the way this story was told may have similarities with the South African tourism campaign. It is unfortunate that the DOT has been called out and accused of plagiarism for work we have done to highlight the testimonial of [a] real retiree,” McCann Philippines director for corporate affairs Niña Terol  told reporters.

“We take full responsibility, as all ideas and storyboards presented were conceptualized by McCann,” Terol said.

Like in the South African ad, the Philippines’ “Sights” featured a foreigner enjoying the beautiful scenery and interacting with locals although he was blind, which was only shown at the closing moments of the ad. The ad concludes with the new tourism slogan, “Experience the Philippines.”

McCann Philippines is part of a New York-based global advertising network operating in more than 120 countries and territories.

DOT spokesperson Frederick Alegre said the ad would not be pulled out or edited in the meantime, adding that it was “unique” and focused on a particular group—foreign retirees.

Alegre said the DOT had been promoting the country to specific markets and the latest ad’s target was the “seniors and retirees.” The country has issued more than 27,000 special retiree visas to foreigners, many of them Japanese, he said.

Alegre said the ad was coordinated with the Philippine Retirement Authority and was part of McCann’s contract under the previous administration.

“We stand by McCann, we stand by the creative execution [of the ad],” Alegre said. “We know for a fact that the Philippines is a choice destination, a choice place to stay for retirees. It’s all part of the series of ads to show the spirit of the Filipino.”

Sen. JV Ejercito, vice chair of the Senate committee on tourism, said it would be better for the DOT “to stick to  ‘It’s more Fun in the Philippines’ tourism campaign ad” of the previous administration as it has become recognized globally.

Ejercito underscored the importance of tourism campaign ads that were “distinctly Filipino.”

He recalled the DOT had also been accused of copying the logo for its ad campaign of “Pilipinas Kay Ganda” in the early days of the Aquino administration.

That logo was strikingly similar to Poland’s tourism logo, “Polska.”

The “more fun” ad also had been criticized for being a copycat of the 1950s Swiss tourism campaign “It’s More Fun in Switzerland!”

Alegre said the “more fun” ad would not be “quite appropriate at this moment,” a reference to the fighting in Marawi City, which has left more than 200 dead.

The ad, which was released on Independence Day, had over 1.7 million views on Facebook and about 50,000 views on YouTube as of 4:30 p.m. on Tuesday.

It featured Japanese retiree M. Uchimura mingling with Filipinos in the Hundred Islands of Pangasinan, the rice terraces of Ifugao, the sand dunes of Paoay and the heritage houses of Vigan.

Toward the end, Uchimura, who wears a hat and sunglasses, takes out his walking stick to navigate the cobblestoned Calle Crisologo of Vigan, and viewers realize that he is blind. The foreign tourist in the South African ad did the same thing, also at the end. —WITH A REPORT FROM CHRISTINE O. AVENDAÑO