‘He knew he was going to die; he was ready for it’ | Inquirer News
Close
menu
search

‘He knew he was going to die; he was ready for it’ 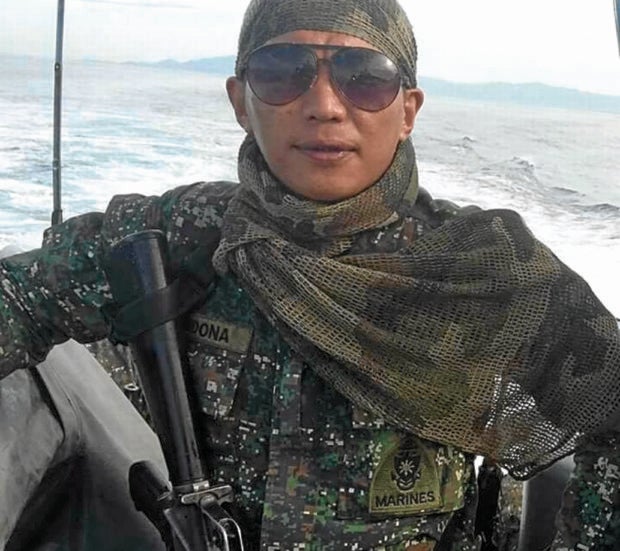 LINGAYEN, Pangasinan—Pfc. Eddie Cardona Jr. was unusually happy when he met his older brother Ronel in Manila on May 29.

He was always joking that day, recalled Ronel.  The jokes sounded as if Eddie was leaving for good, Ronel said, adding that it was “something that he had not done in the past.”

Ronel said his 28-year-old brother was telling him that they should take advantage of his short break to take a selfie together, saying it might be their last time together.

Cardona was one of the 13 Marines killed on June 9 in the battle to retake  Marawi City from the Islamic State-allied Maute  terror group.

Before leaving for Marawi, Eddie washed all the clothes he kept in his barracks in Fort Bonifacio and left his ATM card with his friends for his relatives, Ronel said.

During the fighting, Eddie texted Ronel and other relatives saying that they should call him now because they might not be able to call him again.

Ronel remembered sending Eddie a message asking him about his situation in the morning of June 9. “But he did not reply and then he went offline,” Ronel said.

Eddie had also told him in earlier messages that gunfire would not stop and that they had no chance to sleep.

Ronel said he learned about his brother’s death on June 10 when the wife of another Marine posted on social media the photographs of those killed in Marawi.

“At first, we thought it was not him. But when we realized that it was Eddie, we could not believe it. Then a military officer called us that afternoon,” Ronel said.

“He was such a good brother to us. He was friendly and generous,” he said.

Although Eddie’s death was painful to the family, Ronel said they had accepted his death.

“We were still children when he said that he wanted to be a law enforcer,” Ronel said.

Eddie was the fourth in a brood of seven. After finishing elementary and high school at Barangay Pilar in Bolinao town, he studied at the Philippine College of Criminology in Manila. In 2012, he joined the Marines.

Before he was assigned to Mindanao, Eddie visited the father of his girlfriend, who was working abroad, to ask for her hand in marriage.

On Tuesday, Eddie made his final journey home to Bolinao for his wake in the house he began to build in January at Barangay Goyoden on Santiago Island.

Ronel said he wished that the war in Marawi would end soon. “Many people have died and they are fellow Filipinos. The lives of many families have been disrupted. They cannot work, they cannot move. I hope the fighting ends soon,” he said.

In San Fernando, Pampanga, the family of Insp. Edwin Placido has called on President Duterte to locate the body of the police officer who was killed in the fighting in Marawi in the last week of May.

Placido’s daughter, Ariane, said her mother, Cynthia, had received a police memorandum informing the family about his death and that the body had not been recovered.

Ariane said her uncle, also a police officer in Marawi, was working with the search team.

“I hope the death of my father and many others would not be in vain. I’m hoping for peace not only in Mindanao but for the entire country,” Ariane said.

“Although we are mourning his loss, we are very proud of his courageous feat because he died a hero,” she added.

Placido, 48, was assigned in Marawi in February. He has three children with Cynthia, a supervisor of nonuniformed police personnel.

Ariane said she was praying that Mr. Duterte would be “guided by God in his every decision and action.”

“May you not forget the people who have died for our country,” she said. —WITH A REPORT FROM TONETTE OREJAS