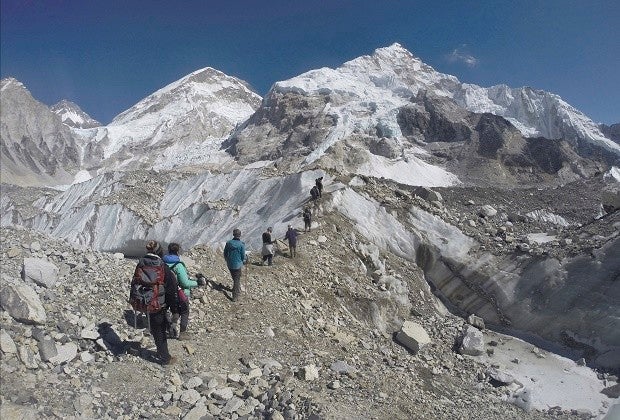 In this Feb. 22, 2016 file photo, international trekkers pass through a glacier at the Mount Everest base camp, Nepal. AP FILE PHOTO

Nearly 450 climbers reached the summit of Mount Everest from the Nepal side in May, officials said Monday, but poor weather and inexperience prevented many others from reaching the top this season.

Nepal issued a record number of permits to foreign mountaineers during the spring climbing season, when a brief window of good weather between late April and the end of May sees a rush for the top of the world’s highest peak.

Almost 450 climbers — 190 foreigners and 259 Nepalis — made the top from the south side in Nepal, said Khem Raj Aryal, an official with the tourism department.

At least 120 others are believed to have made the summit from the Tibetan side, according to unofficial figures.

The Tibet China Mountaineering Association, which validates all ascents from the north side, said they did not yet have confirmed numbers.

Unpredictable weather, including strong winds and unusually cold temperatures at the summit, forced many to turn back.

Bierling said many climbers “ran out of patience” waiting for a break in the weather, while some less seasoned mountaineers lost their nerve.

“More and more inexperienced people go to Everest and some of them realize that the mountain is just too big for them and give up quickly,” she said.

There has been a steady rise in the number of climbers attempting to summit Everest in the last decade as the cost of climbing the peak has been reduced considerably.

Foreigners must pay $11,000 for a permit to scale the mountain but cut-price climbing outfits skimping on basic safety requirements have flourished in recent years, luring amateurs to the challenge.

Steck, who died during an acclimatization climb in late April, was not the only high-profile casualty of the climbing season. Min Bahadur Sherchan, 85, perished while trying to reclaim his title as the world’s oldest person to reach the top.

The season was also marred by two scandals.

South African Ryan Sean Davy was caught on the mountain without a permit and slapped with a 10-year climbing ban, while Polish adventurer Janusz Adamski illegally crossed onto the Nepali side of Everest from Tibet.

Adamski was also given a 10-year climbing ban and could be expelled for illegally entering Nepal. A decision on his deportation is expected Tuesday, said Lokmanya Golchha, Poland’s honorary consul-general.