The figure spelled the biggest single day loss for the military since the Marawi crisis started on May 23.

But Año said it was even expected because what was happening in Marawi was a mixture of conventional and unconventional war.

“We don’t want to lose men in the fighting,” he said.

Año also said that the deaths suffered by the military – coupled with a high number of injuries at 40 on Friday – was brought about by the Maute group’s use of explosives against the advancing soldiers.

He said soldiers were aggressive in their push but the “enemy” was also well-positioned and even using some mosques as cover.

Corporal Jose Raymond Estoreon of the Marine Battalion Landing Team 7, the same unit involved in Friday 13-hour fight in Marawi, said most of them were injured by exploding rocket-propelled grenades and bombs.

“The enemies are hidden in high rise structures,” he said. 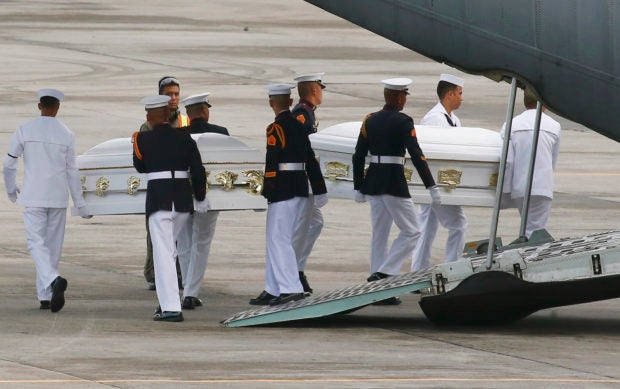 Philippine Marines carry the caskets of two of 13 fellow marines, who were killed Friday in the battle with Muslim militants in Marawi city in southern Philippines, upon arrival at Villamor Air Force base in suburban Pasay city, southeast of Manila, Philippines, Sunday, June 11, 2017. Fighting in Marawi between the government forces and Muslim militants, who laid siege of the city three weeks ago, continues with rising casualties on both sides and civilians and displacing tens of thousands of residents. (AP Photo/Bullit Marquez)

Staff Sergeant Dexter Cañon, also among the 40 soldiers injured on Friday, also spoke of sniper fires that targeted them.

Lt. Gen. Carlito Galvez, the commander of the Western Mindanao Command, said the high number of casualties was to be expected in urban combat situations such as in Marawi.

He cited as example the movie Black Hawk Down in driving his point.

“The enemy knows the terrain and they are well-entrenched,” Galvez said.

Soldiers have been struggling to dislodge hundreds of Maute fighters, who have been using tunnels, antitank weapons and human shields to fortify their positions.

The militants have withstood nearly three weeks of fighting already, even spoiling a government plan to raise the Philippine flag at the heart of Marawi City on Monday.

As of Sunday, fighting continued in the city and some journalists covering the development reported that their vehicles were being hit by wayward bullets.

On Sunday, GMA TV reporter Raffy Tima said they were leaving Marawi and was passing by Sarimanok area when the bumper of their vehicle was hit by sniper fire.

Tima, who was seated at the front, said it was fortunate that none of them was harmed./ac