Duterte condoles with families of fallen Marines at Villamor Air Base 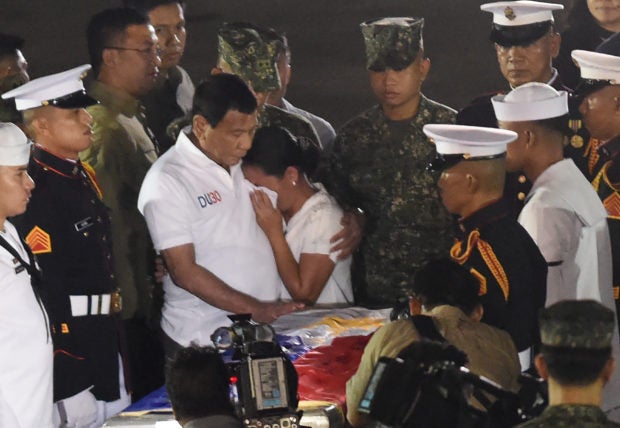 Philippine President Rodrigo Duterte (center, L) consoles a relative of one of the slain marines next to the flag-draped casket, shortly after the bodies of slain marines arrived from Marawi at a military base in Manila on June 11, 2017.
The June 9 ferocious, street-to-street gun battles with the militants saw 13 troops killed, in a dramatic surge in the toll from the conflict, Philippine military spokesmen said. / AFP PHOTO / TED ALJIBE

President Duterte on Sunday night attended a solemn arrival ceremony at Villamor Air Base for eight of the 13 Marines slain in the fighting in Marawi.

Mr. Duterte also condoled for around 30 minutes with the families of the soldiers after arriving at the Villamor Air Base grandstand at around 7:50 p.m.

He did not give any interviews afterwards and immediately proceeded to the Philippine Marines headquarters in Fort Bonifacio to visit the wake of two of the slain Marines whose remains were flown in on Saturday. 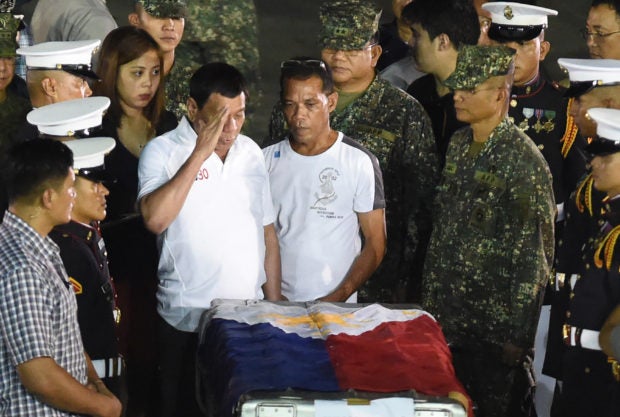 Philippine President Rodrigo Duterte salutes in front of the flag-draped casket containing one of the slain marines shortly after the bodies of slain marines arrived from Marawi at a military base in Manila on June 11, 2017.  AFP PHOTO / TED ALJIBE

The three other Marines who were killed on Friday are now with their families in Mindanao.

“Your sons, brothers, or husbands brought honor to our country,” Marine commandant Brig. Gen. Emmanuel Salamat told the grieving families of the dead Marines at the grandstand before the ceremony started.

They will receive financial assistance from the government while the children of the dead Marines will get scholarships.

They will be brought to the Marines headquarters on Monday morning./ac

Read Next
Death of 13 Marines in Marawi ‘acceptable statistics,’ says Año
EDITORS' PICK
Complete your early Christmas shopping with vivo V25 Series
What’s in a name? ‘Maharlika’ evokes time of mythmaking
The vivo Y16 makes the season of giving more thoughtful for the whole family
China’s Xi unwilling to accept vaccines despite threat from protests — US intel
Easterlies to bring rain in PH on Sunday — Pagasa
House energy committee chair Arroyo bats for cheap electricity
MOST READ
Sunshine Dizon reveals PTSD, depression diagnosis: There’s nothing wrong with asking for help
What’s in a name? ‘Maharlika’ evokes time of mythmaking
Maxene Magalona sees separation from Rob Mananquil as ‘blessing in disguise’: ‘There’s no more anger’
Are we ready for a sovereign wealth fund?
Don't miss out on the latest news and information.