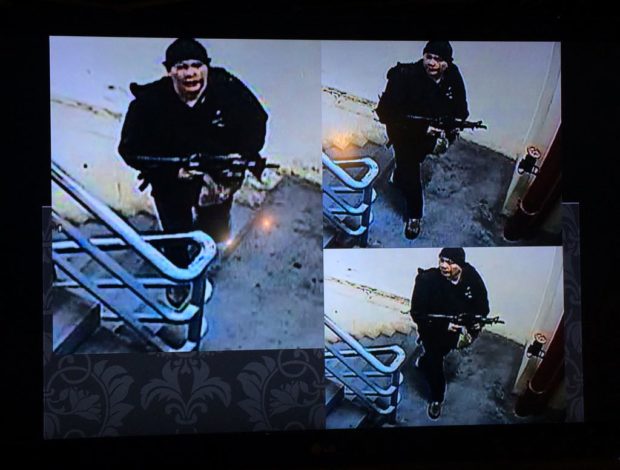 The police are investigating if Jessie Javier Carlos, the gunman in the June 2 Resorts World Manila (RWM) attack, was also the man who crawled out and walked away from the wrecked BMW car where a former policeman and a lawyer were shot dead last week.

“According to (security camera) footage, the suspect in the killing of Mitra and Cruzin had the same height, same build and same clothes (as that of Carlos),” the official said on Friday.

SPO4 Ronald Gallo of the Manila Police District (MPD) said Mitra and Cruzin were both found shot in the head inside the gray BMW, after the vehicle hit the gutter and turned turtle at the corner of Belen and Perez Streets around 10 p.m. on June 1.

Albayalde said they were checking if the victims and Carlos were together before the latter went to RWM past midnight of June 2 from his Sta. Cruz home.

The MPD found four fired cartridges and a 9-mm Tanfoglio pistol with serial no. Z04575 in the Paco crash site.

At the RWM, police recovered an M4 Bushmaster rifle with a defaced serial number and a .380 Tanfoglio pistol with serial no. AA04282 from the charred remains of Carlos.

Anicete said Cruzin, 43, was a dismissed MPD member who ran for Pasay councilor last year. Mitra, 38, a Pasay resident like Cruzin, was a lawyer and son of a former prosecutor.—WITH REPORTS FROM FAITH ESTHER BROWN AND ERMA EDERA