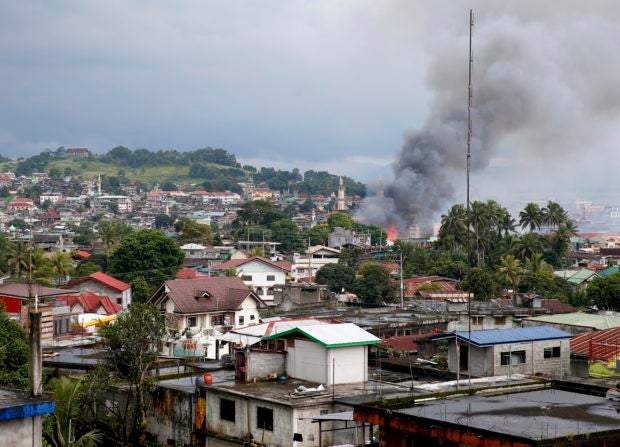 Fire rages at several houses following airstrikes on Saturday, May 27, 2017 by Philippine Air Force fighters to retake control of Marawi City from Muslim militants who had been laying siege on the city since May 23, 2017. (Photo by BULLIT MARQUEZ / AP)

MARAWI CITY – Text messages and social media posts, apparently aimed at stirring Muslim sentiments over the crisis here, have been circulating the past days.

One text message, which was also being shared on social media, had blamed the Kafirs (non-believers, non-Muslims) for what had become of this city following the clashes between government forces and extremists belonging to the Maute group and the Abu Sayyaf.

“They really destroyed the Islamic City. The Muslims had been heavily humiliated. The kafirs destroyed Lanao with bombs,” said the text message sent in Maranao.

A similar message was shared on Facebook by Benzar Ali Imam Tingao on June 3.

Tingao, a brother-in-law of the Maute brothers, founders of the terror group in Lanao del Sur, was arrested along with the family’s patriarch, Cayamora Maute, at a checkpoint in Davao City on Tuesday morning.

Other social posts posed questions such as “Will President Digong order the bombing of Cebu if the Maute and Abu Sayyaf attacked it?”

“No,” another post said. “Marawi had been bombed because Muslims live there. Had Christians lived there, it would not end that way,” it added.

Comments were affirmative of the posts, while others went to as far as saying “some people have died saheed (martyrs).

The circulating posts and text messages appeared to confirm the military’s fear that the situation here could be used by the extremists to recruit more fighters.

Lt. Gen. Carlito Galvez Jr., the chief of the military’s Western Mindanao Command, earlier said images of the burning city could encourage people to fight as well as ask support from overseas.

“I would like to appeal to the media to be sensitive enough. Those scenes from inside will aggravate the situation. Please do not show it,” he said.

Galvez added that the extremists could twist the facts in its favor as “they are expert in technologies, including social media.

“It will create a lot of condemnation on our part. What will happen is that they can recruit more foreign fighters,” he said.

Galvez also defended the result of the airstrikes – which destroyed major parts of the city and left dozens of buildings in ruins – saying the extremists have been hiding in targeted structures, especially in Barangay Bangolo.

Some Maranao residents said they agreed with Galvez’s observation that the bombing run could deepen the anti-government sentiments here.

“It is possible but as to the shifting of sympathy, maybe for some but no large-scale recruitment could take place. Generally, the people of Marawi are not extremists. We are Muslims but we are civilized also,” said Dino Gandarosa.

Saripada Pacasum, the provincial disaster risk reduction management office, said he also did not think that the bombing of the city could lead to sympathy to the extremists.

“Look at what happened, Muslims were the ones saving non-Muslims from them (terrorists),” he said.

Pacasum said the sentiments were understandable as Maranaos really connect with the city.

“Basically, our roots are here. Our forefathers started here. So if any of us see the images of destruction, we are deeply hurt. We cannot imagine that this would really happen– things that we only see in movies,” he said.

Pacasum said his heart also bled for what happened to the city.

“It’s as if my heart was being repeatedly stabbed, especially when (a TV crew) showed me the buildings in ruins. The streets were no longer recognizable, It’s very painful because Maranao is Marawi, it’s where our culture and history are,” he said.

He said with the culture and history of Maranaos now in ruins, the future generation would no longer have an idea of what these were.

But Pacasum said what happened to the city should not further divide Muslims and Christians along religious lines.

“I hope people would not fuel the sentiments anymore,” he said.  SFM