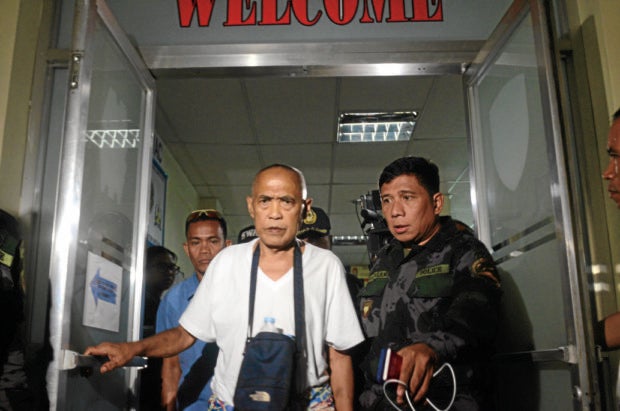 DAVAO CITY—Weapons charges will be brought against Cayamora Maute, father of the leaders of the terror group battling government forces in Marawi City.

Brig. Gen. Gilbert Gapay, assistant commander of the military’s Eastern Mindanao Command, on Wednesday said that a grenade and a semiautomatic pistol were found in the van in which the 67-year-old Maute was found at a security checkpoint here on Tuesday morning.

The weapons were discovered hours after the arrest of Maute, when the van was already at the Davao City Police Office (DCPO) compound where it was being searched, Gapay said.

Gapay said the police and the military had tightened  security at the DCPO, where the suspects were detained.

The DCPO on Wednesday morning said that the suspects would be transferred by the military to an undisclosed detention center for security.

Gapay said the arrest of Maute would dampen the morale of his sons Omarkhayam and Abdullah Maute, leaders of the terror group named after the family.

“All the information we will be getting from Cayamora Maute will be very valuable and instrumental to the complete neutralization of this terror group,” Gapay said.

He said during the “formative years” of the terror group, Cayamora was there to “give direction, guidance and influence to his sons.”

Gapay said Cayamora was a former member of the Moro Islamic Liberation Front but was expelled from the group.

“Maybe that led him to shift to terrorism,” Gapay said.

Davao Mayor Sara Duterte-Carpio said in a statement that the apprehension of Cayamora was “crucial in the government’s efforts to end the reign of terror experienced in Marawi and the entire Mindanao these days.”

“This is an important development in our collective fight to reclaim peace and defeat lawlessness and terrorism, and all that threatens our freedom and future,” Duterte said as she lauded the Task Force Davao and commended Lt. Col. Nestor Mondia, Task Force Davao detachment commander, and his team for the arrest of Maute.