Aguirre claimed the senators flew to Marawi and met with members of two influential local political clans a few days before the May 23 siege.

Besides the two senators, he said another vocal critic of President Duterte, Magdalo Rep. Gary Alejano, and Ronald Llamas, the political adviser of former President Benigno Aquino III, were also present at the meeting supposedly held on May 2 at the Lake View Resort Hotel.

Aguirre showed to the media a photo of the supposed meeting.

“Senator Bam Aquino went to Marawi on April 24 and April 28. They stayed there … . Present were, I think, Aquino, Ronald Llamas, Alejano, Trillanes and some clans there in Marawi. They were Moro families,” Aguirre told a press briefing.

“I don’t know why after they went there, the violence broke out after about two weeks,” he said.

When asked if Maute members attended the meeting, Aguirre said: “I don’t know. I was told that they met with several families there, including the Lucmans, along with the Alonto family.”

“But I don’t want to connect it, unless there is evidence (linking them) with the money seized,” he continued, referring to the bundles of cash and stale checks worth P79 million that the military recovered from a house occupied by Maute snipers in Marawi.

Asked about the possibility that Aquino, Trillanes, Alejano and Llamas were responsible for the Marawi siege, Aguirre replied: “Yes, but I don’t want to go on a speculation.”

Pressed to elaborate, he said: “It will be investigated… But it’s possible. It’s probable.”

The justice secretary said the incident could also be part of a destabilization plot against Mr. Duterte, contradicting the statements of the military and the President himself that the attack in Marawi was related to terrorism which led to the declaration of martial law in Mindanao.

“It’s different. That’s why I said it could be terrorism. This could be the spark that’s why the terroristic acts in Marawi happened,” he said. “There was agitation.” 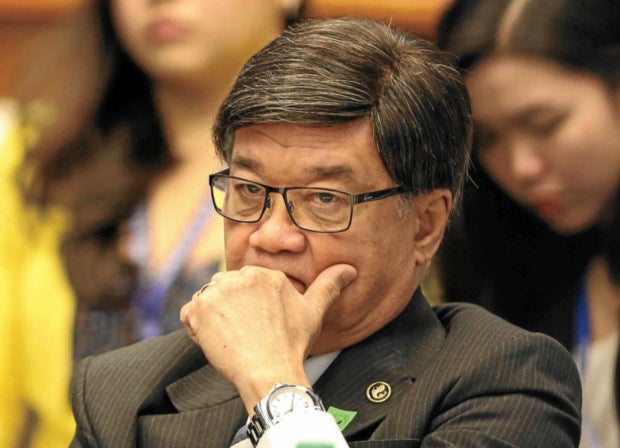 Aguirre was apparently unaware that the photo of the alleged meeting in Marawi was posted on a Facebook fan page created by the President’s supporters on May 13, or more than a week before terrorists mounted the attack.

Seen in the photo were Trillanes, Alejano, Llamas, former Pampanga Gov. Mark Lapid and another man, identified in another Facebook post as Ace Cerilles.

Stories identifying Aquino as the “mastermind” of the Marawi siege were also first shared and posted on several pro-Duterte blogs and known sources of fake news, including “dugongmaharlika.com” and “allthingspinoy.com.”

Cerilles, who identified himself as a deputy public relations officer for Mindanao of the Vice Governors League of the Philippines, said the picture was taken on Sept. 4, 2015, at Iloilo International Airport.

“I categorically deny that such meeting ever took place,” Adiong said.

Trillanes denied being in Marawi on May 2. He said he had not been to Marawi in the past three years.

“The incompetence of Aguirre is only matched by his stupidity. I would advise him to avoid getting his intel from Facebook conspiracy theorists,” Trillanes said.

Aquino said he was in the Senate on May 2 and earlier on that day spoke at the commencement exercises in Polytechnic University of the Philippines.

“If not for the tragic events in Marawi, that would even be very funny,”  Llamas said in a text message. “But I no longer want to dignify fake news.”

“Somebody should seriously study filing a case against Aguirre for being a fabricator of dangerous lies,” said Ifugao Rep. Teddy Baguilat.

Baguilat said the people accused by Aguirre “would be the last to orchestrate something that would risk the lives of our soldiers and civilians.”  —WITH REPORTS FROM NIKKO DIZON, CHRISTINE O. AVENDAÑO AND JIGGER J, JERUSALEM