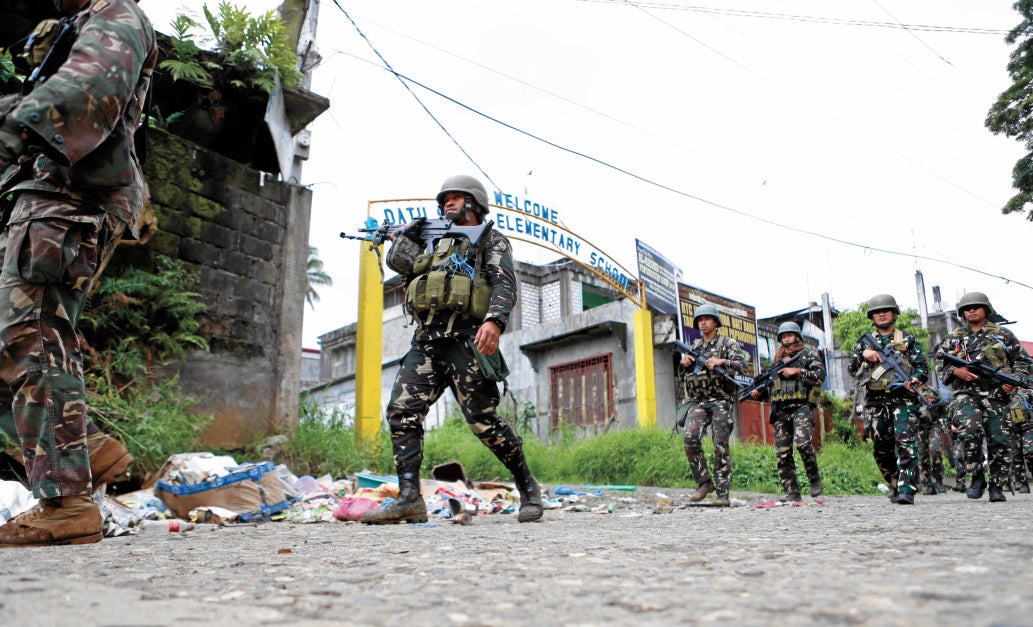 Two weeks after gunmen waving black flags of the Islamic State (IS) group rampaged through Marawi, a Muslim-majority city, initial assertions from authorities that the conflict would be over in days have given way to warnings of a protracted battle.

“The advantage of the [enemy] is their mastery of the terrain. They know where even the smallest alleys lead to and they are free to go around,” Maj. Rowan Rimas, an operations officer for the Philippine Marines, told reporters in Marawi this week.

“They know where the government forces are coming from and where they are taking cover. They have snipers and their positions are well defended,” Rimas said.

Defense Secretary Delfin Lorenzana admitted at the start of the conflict that security forces were taken by surprise when dozens of gunmen appeared on the streets of Marawi following a failed raid to capture one of their leaders.

They emerged from homes in Marawi, the biggest Islamic city in the mainly Catholic Philippines with 200,000 residents, and went on a rampage that included taking a Catholic priest hostage, opening up two jails and destroying many buildings.

Lorenzana and military officials have since said they unexpectedly interrupted plans by the militants to take over Marawi in a spectacular event to show that IS had arrived in the Philippines and was intent on carving out a local territory.

They initially estimated there were about 100 gunmen but later said there were as many as 500, supplemented by foreign fighters, including from Chechnya, Saudi Arabia and Yemen.

The fighters have also had a surprisingly large arsenal of military hardware, including rocket-propelled grenades and a so-far inexhaustible amount of ammunition for high-powered assault rifles.

“There was indeed a bigger plan and it was supposed to wreak more havoc,” Brig. Gen. Restituto Padilla, a spokesperson for the military, told reporters on Wednesday.

Last week, the Senate was shown a video of the terrorists plotting a far more sophisticated attack on Marawi than the assault they launched there on May 23.

The Associated Press (AP) first reported on the video and quoted the military chief of staff, Gen. Eduardo Año, as saying the images showed the intention to dismember “a portion of the Philippine territory by occupying the whole of Marawi City and establishing their own Islamic state or government.”

Authorities said two brothers from Marawi surnamed Maute were key leaders in the battle, giving the terrorists a crucial home-ground advantage that has allowed them to withstand a relentless air campaign of bombs and rocket strikes.

The roughly 10 percent of Marawi held by the terrorists has many tunnels and basements that can withstand 227-kilo bombs, Lt. Col. Jo-ar Herrera told Agence France-Presse (AFP) on Monday.

“Even mosques here have tunnels,” Herrera said, adding the fighters were using them to escape the bombing as well as to store high-powered weapons.

“These are all part of the dynamics of the battlefield that makes it more difficult for us,” he added.

Herrera said military protocol called for mosques and Islamic schools known as madrassas to be spared from airstrikes and artillery, a limitation exploited by the gunmen.

Residents built reinforced bunkers and tunnels underneath their houses after a 1970 Moro uprising led to large parts of the city being burned, Norodin Alonto Lucman, a senior Marawi politician, told AFP.

The Mautes are in partnership with Abu Sayyaf leader Isnilon Hapilon, the target of the initial raid whom the military regards as the IS “emir,” or its top leader, in the Philippines.

Military officials said they believed Hapilon was still in Marawi.

Adding to concerns that the terrorists were running a far more complex and extensive operation than authorities initially believed was the discovery on Monday in a house the gunmen had been using of P52.2 million in cash.

The gunmen have the added insurance of about 2,000 trapped civilians serving as virtual human shields, along with the priest, Fr. Teresito Suganob, and more than a dozen civilians kidnapped at the start of the crisis.

President Duterte imposed martial law across the entire island of Mindanao, home to 20 million people, within hours of the crisis erupting in a bid to quickly crush what he said was the fast-rising threat from IS.

He set a target late last week of Tuesday to clear the city of the terrorists.

“I am ordering you to crush our enemy,” he said in a speech to troops in the South on Tuesday. “When I say crush them, you have to destroy everything, including lives.”

Lorenzana, who saw his own 10-day target pass on the weekend, said battles in recent years with Islamist terrorists in Mindanao typically led to them running away but that this time they were showing far more resolve. —REPORTS FROM AFP AND AP